Online battle royale game called Fortnite has no shortage of events and activities to keep people coming back for more. Season 2 just recently finished, with the Doomsday event introducing the new map Season 3 is centered around. Now that the wave caused by the Device has swallowed big parts of the map, there is an entire new playing field for users to play on.

For every season in the second chapter of the game, the developer of Fortnite called Epic Games has introduced a Hype Nite for those to face off with each other. This one creates an opportunity to rank on the leaderboard of the game and earn more Hype points for yourself. Even though you are not a fan of Fortnite’s Chapter 2 map, you may still want to participate in Hype Nite in order to earn more points for your player. 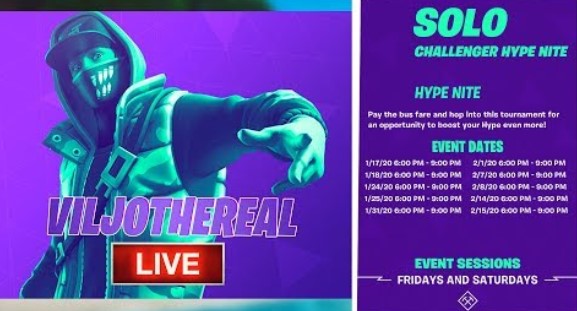 The new competition of Fortnite named Hype Nite pits players against each other based on their skill level, competing to be the winner of their league and earn Hype points. The season 3 of the event is currently scheduled to take place every Sunday from July 19 to August 16, according to the official website of Epic Games. The contestants will be separated into three different leagues to compete in based on their Hype points. Players with no Hype or less than 1,500 Hype will compete in a division of the Open League. As for those with anywhere from 1,500 to 6,000 Hype will compete in the Contender League.

Please keep in mind that only participants with more than 6,000 Hype points will be able to compete in the Champion League, playing for an opportunity to rank in the top leaderboards of the game. In case you are not sure how many Hype points you have, you will want to check before registering to know what league you will be playing in.

For your information, every Hype Nite will have a three-hour time window in which players are able to join matches. Once the session closes, though, they will not be able to join in the event anymore that day. That is the rule that should be followed.

If you want too boost your Hype ahead of the Hype Nite competition, you are recommended to be on the lookout for Solo Hype Nites, which are held randomly in the game on Fridays and Saturdays. Joining in these single-round games will get you more Hype points, giving you a higher ranking in the leagues.

Another thing to take note is that your overall ranking in the league will also give you a Hype point cashout at the end, rewarding you if you rank within the Top 50 percent of participants.

If you have any questions about how to join Fortnite Hype Nite, feel free to contact the representative of Epic Games. You can also go to the community of Fortnite and ask the members of the community for help.