Fortnite would not be where it is now without its legions of creators blowing up the game on the platforms such as Youtube and Twitch and Epic Gmes certainly seems to realize this fact. That is why they have launched a new program that can runs from next week through the end of the year where the creator is able to make money with Fornite creator code whenever any of their friends or fans spend V bucks in the game.

For those who want to support the creator, you will enter their Epic name into the game and every 14 days, either reselect them or pick someone new. After that, the V Buck purchases, whether they be paid or gained in game, will give the creator some royalty money. However, most people are curious how to make money by themselves and the process is going to be a bit more complicated. 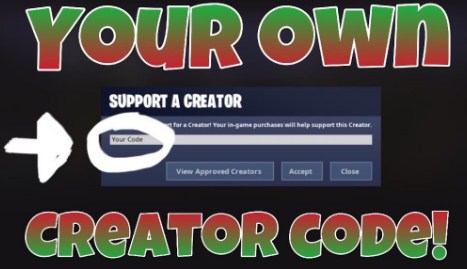 Here is how to apply or possibly qualify for your own slice of the pie, that is $5 going to your every 10,000 V Bucks your supports spend. The first thing is to be a creator. You should have regularly created and released Fortnite content over the past thirty days. This one includes clear stuff such as Youtube and Twitch streaming, but also could be fan art, edited video, and music. The second one is you need to have 1,000 followers on any single social media platform such as Youtube, Twitter, Instagram, Twitch, and so on. The third one is you have to complete the Affiliate Agreement of Epic and abide by the Creator Code of Conduct. Keep in mind that the Code of Conduct includes obvious stuff such as not harassing players or being toxic or promoting shady V Bucks scams and so on. the fourth one is you have to be capable of receiving payment in a form Epic supports, and you cannot be Iran, North Korea, or China.

Epic Games is already warning all the players that this kind of thing is going to be an experience as they have never done anything like this before. All of them expect the backlog of applications so the sooner you apply, the more likely you are to get chosen, as they may have to close entries at some point.

As for whether the whole program is actually a great deal for creators, since it is free money, so fundamentally it is better than nothing. However, $5 for each 10,000 V buck supporters spend is not going to add up terribly fast, especially for smaller creators, 10,000 V bucks is around $100, depending on what bundles you purchase, so you could get people to spend 50,000 V Bucks, the amount of Epic Games was gaining out as the grand prize for Summer Skirmish, and nets you an entire $25. If you compare to the Twitch Prime subscription, where fans pay $5 a month and $2.50 to 3.50 of that goes to the creator, it is not that great. Nevertheless, it is still better than nothing.