On June 27, 2018, Fortnite Battle Royale introduced its latest limited time mode called Playground mode. This thing is one of the most anticipated updates to the battle royale shooter game in months. For the very first time, Playground Mode allows the players of Fortnite Battle Royale the opportunity to practice building, shooting, and the other game mechanics and strategy for extended periods of time without fear being eliminated.

How to play Fortnite Playground Mode or practice mode? The players are able to enter Playground Mode like any other Fortnite mode. Instead of being sorted into servers with 99 enemies, they will be send by themselves or with up to three players in the same team to the empty island. Once they are there, they have an hour to practice Fortnote to the hearts’ content without the fear of the storm, that only closes in during the last five minutes of the session. 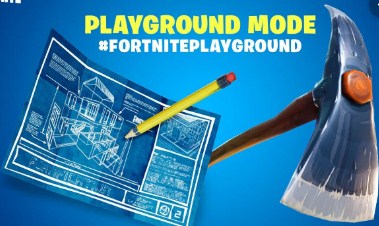 Do you want to learn how to build the simple tower without the consequences of messing up? Do you want to practice shooting a hand cannon at a distance? Do you want to check out the loot spots you normally avoid? Well now you are able to do all of them, free from the ceaseless terror of 99 enemies chasing you down.

Not that long after initially launching Playground Mode or practice mode, the developer of Fortnite named Epic Games had to temporarily close the mode in order to make repairs to its matchmaking services. According to the update that was posted on the official Twitter account of Epic Games, they are still working to re-enable Playground Mode.

Can you die in Playground Mode? Every gamer who is tired of constantly being eliminated and sent back to Spawn Island will be happy to hear that although it is possible to be killed by friendly fire during practice skirmishes in the Playground Mode, all of them respawn onto the map after elimination. During the final 5 minutes of the session, however, you are able to be eliminated permanently by the storm.

What is the point of the Playground Mode? Playground Mode is the closest thing that Fortnite Battle Royale has ever come to having something that resembles a practice mode. Until this age, experience with the mechanics of the game had to be developed during combat, within the real games.

Having the mode known as Playground Mode makes it possible to raise the floor of the collective familiarity of the players and skill with building and shooting. Aside from that, it also gives tremendous opportunities for elite players and Fortnite content creators on the platforms such as Youtube and Twitch to stretch the limits of the imaginations and develop new strategies and new memes. A full hour of free play means you are able to expect to see some amazing expansive, intricate builds, some GIF-able trick sniper shots between teammates, and the opportunities to find Easter eggs like never before. Do you want to try it?