As we have described on another article on this page about the Unvaulting Event, you may understand all about the event, starting form how to follow, complete the event and get the rewards. Do you already know what rewards that you can get from Unvaulting Event?

Of course, the reward will be granted to you after following this event is Arcana Glider. This is a kind of awesome item that you can get in the Item Shop with the cost of 1,200 v-bucks. The Arcana Glider can be purchased from 3rd May to 4th May. Besides, you will get a chance to have the Arcana Glider by following the Nexus Event in live. 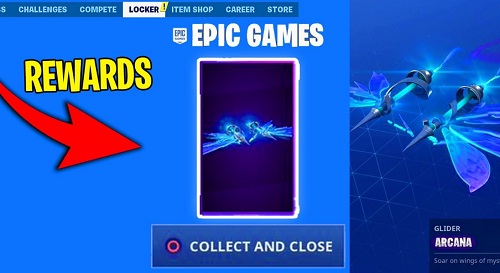 Due to the Arcana Glider can be got by following the Nexus Event, definitely, if you has purchased it from Item Shop, the Arcana Glider will be refunded in the form of v-bucks to your account. However, it is the good news for every player who is still waiting the Arcana Glider delivered by Fortnite. But, you do not have to worry because Fortnite promisingly will give the Arcana Glider to you in coming days. So, be patient!

Of course, to follow this event, you should have the awesome skill. It is because you should jump into the vault to the enter In-Between. Then, you are allowed to choose the weapon to unvault. The options are Drum Gun, Planes, Infinity Blade, Grappler, Bouncers and Tactical SMG. After leaving In-Between, you will be launched into the air. Then, you should face the other obstacles including destroying half of Retail Row and Titled Towers and cracking the Polar Peak.

How about you? You probably want to follow this Nexus Live Event to get a chance in accepting the Arcana Glider, don’t you?