How to Regain Health as Wolverine in Fortnite

Many Fortnite players who have followed for Wolverine’s challenge series asking the question on some gaming forums of how to regain Wolverine’s health. However, you will need to regain a total of 100 health points as Wolverine during one or more battle royale games. 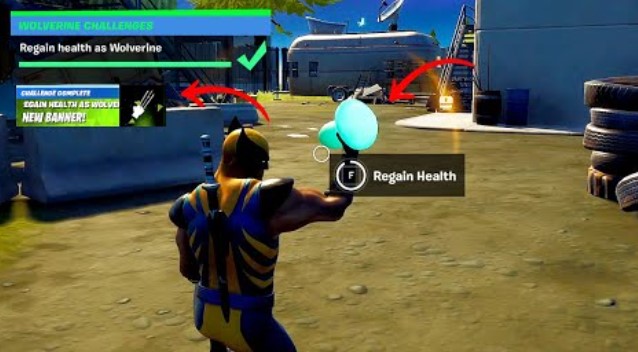 Method 1: To Regain Health as Wolverine in Fortnite

Of course, to unlock the Wolverine’s skin, you definitely have to complete the previous challenge from week 1 – week 6 in Fortnite Season 4. All you need to do is to defeat Wolverine first that you can do in Week 6. You are able to defeat him in Weepings Woods.

Once you get the Wolverine’s skin, the main thing that you need to do is to deal some damage and heal it. In this case, you can use the items such as fruits, bandages, medkits and even chug splash to regain some Wolverine’s health. Once you have healed the required amount of health, then, the particular Wolverine challenge is finally done.

Method 2: To Regain Health as Wolverine in Fortnite

After you have the Wolverine’s skin, you need to choose the skin and dive again on Apollo Island. Then, several options will be available to you. In this way, you are able to play normally and complete this challenge by recovering life between two flights.

You can also complete this challenge by landing in a landmark, far from the bus injectory to evade being contested if possible. After that, grab your hands on healing items before building a ramp from which you will jump. Then, treat yourself with these items.

Well, Slurpy Swamp’s surroundings with SLURP barrels and the healing blue waters can be a great method to complete Wolverine’s challenge without getting overwhelmed.

Note: to know how to defeat Wolverine in Week 6 challenge, we certainly will show you in the next section below.

For Fortnite players who are looking to complete this challenge without involving any opponents are able to use fall damage. Moreover, they can deal damage to themselves by jumping off of tall structures, then, they can do it repeatedly. Another way, they also can jump from the structures which they build themselves to create an approach even easier.

How Much Health Does Wolverine Have?

In Fortnite, Wolverine put up a fight by just asking those ruined Sentinels. Which makes him so hard to defeat is because he has over 1,000 health/shields available. He definitely becomes aggressive when he knows that there is someone who is trying to attack him.

Who is Wolverine in Fortnite?

Wolverine is the third boss added to the game in Fortnite season 4 after Doctor Doom and Iron Man. In this challenge,  Wolverine or also well-known Logan is the hardest one to defeat so far. Wolverine has the ability to resist buildings to make him quite the challenge to deal with.

Wolverine spawns in Weeping Woods. Unfortunately, there is no exact spot in Weeping Woods as the location of Wolverine’s spawn. In the other words, Wolverine can be anywhere in the vicinity of Weeping Woods. So, the players who want to find him are a bit hard. The main clue is Wolverine usually roams in the forest. That’s why taking down the Wolverine boss is the hardest challenge to do.

Where to Find Wolverine

As a third boss in Fortnite, Wolverine definitely can be found in Weeping Woods or Slurpy Swamp. The exact coordinates of his locations are C5, C6, D5 and D6. Unfortunately, there is no set spawn location of where to find Wolverine in Fortnite.

How to Defeat Wolverine in Fortnite in Week 6 Challenge?

To fulfill our promise to explain how to defeat Wolverine in Fortnite, so here is the way to take down him in Fortnite.

With 1,000 health/shields which Wolverine has, certainly, those makes him so strong and a bit hard to defeat. Well, you will need any tips and tricks in defeating Wolverine.

After you are in Weeping Woods and hear his footsteps. You are recommended to sneak around next to him. Once you go next to him, Wolverine will automatically see you to start attacking you faster than you attack him. You probably recognize that he runs really fast, so if you try building in front of him, you will fail at all. Certainly, he will be using his claw mark to destroy your building.

Then, if it’s possible, the only way to attack him is from a far on top of a building. Meanwhile, fighting him up close is a bad idea unless you can give enough damage as quickly as possible to take him down. Apart from that he will run faster than you. Wolverine also will shred your structures. So, building it is such an effective way to take him down easily.

Once you relegated Wolverine, you really can grab Wolverine’s Claws superpower ability. Somehow, it will allow you to do an Air Slash Maneuver which you can do in mid-air. In this way, you are able to spin around with the claws extended and tear up anyone in your path.

To evade him, you also can dash in the air if you hit the jump button again. A generic slashing attack and the dodge ability is your primary in defeating Wolverine.