There is a new exclusive skin of Fortnite Battle Royale to players who own a Samsung smartphone. This time, only those who pre-order or buy a phone from the Galaxy S10 series after release will be able to unlock the exclusive outfit. 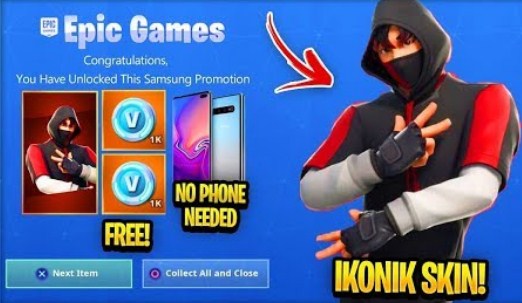 Please take a note that not all purchases of the Galaxy S10 series will let players to unlock these exclusive cosmetic items. According to Samsung, the players have to buy from participant retailers if they want to get the items, but it does not specify who these retailers are. Every player who buys directly from the Samsung store will clearly receive those cosmetics. Otherwise, it is safer to check with the store that is selling your device if they are a participant retailer of this promotion. People think the online stores will probably have some indicator that they are participant retailers.

How to unlock the iKONIc skin in Fortnite? do not forget that the iKONIK skin will be unlockable when the Galaxy S10 phones are released on March 8. Once again, all the players must be using one of these smartphones to unlock it. they must download Fortnite on their Samsung S10 device from the official website of Epic Games and launch the game. then, they need to sign in normally to the Epic Games account they want the skin to be in after claiming it.

The first thing that you have to do is to go to the Store tab and the iKONIK skin should be there. Then, tap it and claim the item that should now be found in your Locker tab located under Account and Equipment. In case you have not registered a credit card in your Epic Games account, you need to do so to proceed and Samsung says your credit card will not be charged.

If the account of Epic Games that you use to claim the item is the same one as the one that you use to play in the other platforms, the skin will also be available in the other platforms. All Fortnite players have until December 31 of this year to buy the Samsung Galaxy S10 from the participant retailer and claim the iKONIK skin. Every purchase made after this period will not come with this amazing offer, and the ones who fail to claim the outfit by that date will also lose their right to claim the item.