How to Unlock Wolverine Skin in Week 6

Week 6 finally comes to allow you to complete the series of Wolverine challenges as the continuation of week 5 in purpose to unlock Wolverine skin as one of your desired skins in Fortnite. So, follow our ways below to complete Wolverine Challenge Week 6! 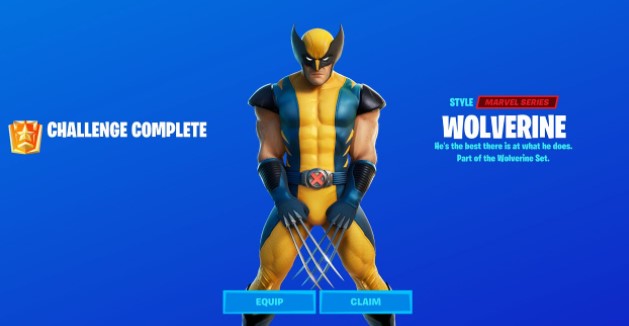 The easiest way to eliminate Wolverine in Weeping Woods, you definitely have to play solos or squads. In this case, many players prefer to play in squads to ease eliminating Wolverine from Weeping Woods.

As we know that Weeping Woods is a place where he gets spawned but there are a few places that you will find him. We know that Wolverine has a lot of health and healing power, so it will be dangerous near him. So, the main place that you can check for Wolverine is on the top right corner of the Weeping Woods. He is mostly spawned over here on the top right corner or he is also in the main house over.

Well, these are the places which you want to go ahead and find Wolverine and once you are next to these places. Once you are at this place, you will automatically hear his footsteps after checking all of these places. Wolverine probably will go to any spots at Weeping Woods that make it difficult to eliminate him.

Then, how to eliminate Wolverine in Weeping Woods?

Once you are in Weeping Woods and hear his footsteps. It is better for you to sneak around next to him. After you go next to him, Wolverine automatically will see you to start attacking you faster than you attack him. You may recognize that Wolverine runs really fast, so if you try building in front of him, it will not work at all. Of course, he will use his claw mark to destroy your building.

To eliminate him, you can try finding an assault rifle or maximum a sniper rifle. Then, the easiest and fastest way to eliminate him is to get on the top of a building and to ensure that he does not come near you as he is so smart. If you go on the top of a building, he will come on top of it. Once he destroys your building, he can also build it more. The more destroyed the more you have to make.

When you are on the top of a building, it can successfully and easily eliminate him by just shooting at him. Keep shooting him with all of your bullets until you make sure that he is finally dead.

Other Challenges in Week 6

Besides eliminating Wolverine in Weeing Woods,  there are also some other challenges in Week 6 that you need to complete. Of course it’s worth going out of your way to complete them. Here are the Week 6 challenges:

This is one of the Week 6 challenges which is relatively easy to complete. To complete this challenge, you need to head to the Weeping Woods POI in Fortnite. It is located to the south-west of The Authority on the center of Fortnite map.

Well, you may find it hard to complete it because there is potentially not enough chests and competition from opponents. The best jumping into squads or solos to ensure you are competing with teammates, even opponents.

However, this place is no doubt as a popular drop place to begin with, but it will die down as the week goes on. To complete this challenge, you have to head to D5 and D6 where the building provides most chests possible.

The challenge to collect the stone from Coral Castle, it is a painfully simple challenge. It simply drops in at coral Castle located in the top left of the map and harvest any stone materials. Of course, there are plenty of stone buildings, sand structures, and rocks to take advantage of this challenge.

It can be called the simple one, but it has a lot of luck to complete it. In this challenge, you will need to do a lot of fishing to obtain it done and you are searching for a legendary fish (one with a golden color)

To consume a Legendary Fish, you need to head to any river, lake, pond, dock, or even sea in the game. From this way, you need to find an appropriate fishing spot with fishing rods. You probably will need to get an upgraded fishing rod to catch a legendary fish. Instead, you can also use a harpoon gun to catch fish.

Of course, you will find a lot of fruits and vegetables hidden in boxes at Holly Hedges. But, those chests definitely are really easy to spot due to they look like the ones you will find at any supermarket. It simply finds these boxes and eats what is inside.

Challenge 6: Ride A Zipline From Retail Row to Steamy Stacks

Indeed, Zipline can be found in the north-east of Retail Row. It will stretch all the way across to Steamy Stacks. Well, to evade being shot by your opponents and disturbed when you do this trek, you definitely can jump into Team Rumble.

Even though there is not a leak that informs you how to get the Black Panther’s Kinetic Shockwave, this mythic weapon is totally needed to complete this challenge. Then, if it is a pick up item, you automatically have to complete the challenge in Team Rumble and may be the easiest one to do it in.

But, if Black Panther is a boss, of course you have to defeat him in a regular BR match either in solos, duos, or squads. After you have used the ability, it simply switches to a weapon and shoots your enemies.

It is a simple challenge to complete, but if you do not know the exact location of Slurpy Swamp, it will be totally hard for you. Caused, if the final circle does not finish here or if none visit this location.

But, there is a great trick to get it. If you play Team Rumble enough times, more than likely the battle bus drops allow a mix of both teams to drop in this location or the final circle will push you here. Of course, you can get on top of a building and look for a chest and a rifle to take out loot-less enemies. Indeed, it may take you a few tries to do. So, don’t focus too on getting this challenge done, but more than it. Anything surely will come naturally.

In week 1, you definitely have to investigate any mysterious Claw Marks in any location in Weepings Woods. The location of Weeping Woods is in C5, C6, D5 and D6 on the Fortnite map.

Those are all locations that you can visit in finding the claw marks in any random spots in Weeping Woods.

The loading screen hides towards the front of the machine after you are inside Quinjet Patrol site. The monitor can be found in the upper right-hand corner when you enter from the cargo compartment. This week, the player will be numerous to rush to the Quinjet Patrol Sites.

Well, the most effective strategy is to aim for the last Quinjet to land on the map. Then, rush into the cargo bay of the targeted Quinjet from the battle bus.

Well, the trophy can be found on a shelf in a small room inside the large shed. Then, all you need to do is to interact with the item to pick it up. Until the end of the game, you will wear the back bling. Once the challenge is over, the cosmetics will be automatically stored in your collection for good.

Week 4: Launch off all Sentinel Hands without touching the ground (1)

Once you know that week 3 challenge is allowing you to launch off all Sentinel hands without touching the ground, of course you have to find the exact location where the Sentinels are. Well, the exact location of Sentinels is towards the west of Lazy Lake, and falls near the border of coordinated E5 and E6.

Instead, to ease you finding the Sentinel’s location, you absolutely can see it on the Fortnite map. Certainly, a Fortnite map will guide you to appear at any location of Fortnite island. Unfortunately, you may get a bit hard to find it because the location is pretty difficult to miss as there are a lot of large Sentinels fallen on the ground in awkward positions.

How to complete the launch off all Sentinel Hands’ challenge? There are a total of six Sentinel hands that you can find in different locations. Of course, to get those Sentinel hands, you need to jump off. In this case, you do not touch the ground between jumps because it will make the challenges harder to complete.

The best way that you can do is to land on one of the Sentinel’s hands. Then, let your character slide off into the air. Well, on the way down, you are able to glide towards the next land. The momentum and the distance between Sentinel’s hands are totally the main thing that make this challenge so hard to complete. Keep in mind that Sentinel Graveyard is a fairly popular location this week when anyone is trying to complete this challenge.

The truck itself can be found on a small rock plateau between the two houses which sits to the south-east of the lighthouse. Then, once you have landed near the Trask Transport Truck, you simply head inside to make sure that the challenge is finally done. Afterwards, you are able to get back to your match.