Chapter 3 Season 3 FNCS broadcasts start on July 10, 2022. Here we are going to inform you of the ways to watch your favorite competitors battle it out for a share of $3,000,000 as well as the brand-new Axe of Champions.

Now, we are going to be covering all 3 FNCS Qualifiers on July 10, 15, and 17. Coverage will continue with the FNCS Semi-Finals on July 22 to 24, and the Finals on August 13 and 14. The official English Broadcasts are going to focus on the NA East and Europe server regions this season. Below is the schedule for each supported language

Where to Watch FNCS Online?

As always you can watch in-game in Legend’s Landing, watch the official FNCS live stream in our supported languages, or you can watch natively at any of the links below:

English coverage of EU and NAE:

How to Watch FNCS at Legends Landing?

Apparently, Legends Landing continues to be the best place to watch the English version of the FNCS broadcast in Fortnite. If you want to watch FNCS at Legends Landing, simply you are able to enter the Legends Landing Creative map with the code 3303-7480-5925 or find it in Discovery.

Fortnite has four new cosmetic Drops which you are able to earn by watching FNCS this season. Just tune in to https://watch.fortnite.com, Legends Landing, or any Drops-supported Twitch channel during the FNCS competitions to obtain this season’s Drops. To make sure you are eligible for Drops on Twitch, you have to link your Epic account and Twitch account within 14 days of claiming your Drop reward to be processed.

At this time, you are able to earn the King and Champion Spray, Seeker’s Strike Loading Screen, Peaceful Emoji, and the Champion’s Honor Backbling. Also, these items may be available in the Fortnite in-game Item Shop at a later date. 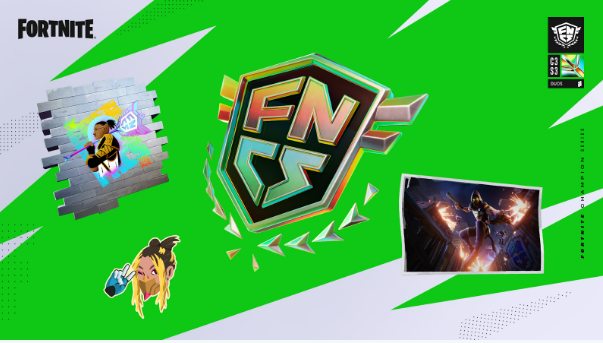 We’re bringing back some of your favorite FNCS casters, hosts, and analysts to help share the story of FNCS while it unfolds. Please see below to find out who will be a part of the show:

Rewards of the Legends Landing Fortnite

Here are these rewards:

K.O! Emoticon is an Uncommon Emoticon you can find in the game of Fortnite: Battle Royale. It is able to be bought with the FNCS C3S2 Bundle for 1,200 V-Bucks. Or you are also able to get it for free by watching a 30 minutes FNCS stream with drops enabled on Twitch. According to research, K.O! emoticon was first released in Fortnite Chapter 3: Season 2.

Tekniqual Knockout Emoticon is an Uncommon Emoticon you can find in the game of Fortnite: Battle Royale. It could be got as a reward from Prestige Spray & Pray Missions. Or you are also able to get this Emoticon for free by watching a 30 minutes FNCS stream with drops enabled on Twitch. For your information, this Tekniqual Knockout emoticon was first added to the game in Fortnite Chapter 3 Season 2.

Some Methods to Get FNCS Rewards

Apparently, there are some methods you can do to get FNCS rewards:

The players are able to visit the game’s official website, watch.fortnite.com, which is dedicated to streaming the FNCS.

The users of Twitch are able to watch the FNCS to earn Drops on supported channels.

Warning: The players of Fortnite have to link their Epic Games and Twitch accounts to avail the rewards from Drop-supported channels on Twitch. Also, the players have to do so within 14 days of claiming their drop reward.