What is the trending news in Fortnite today?

Of course, if you open Twitter or other news-lines, you will be shocked by the news about Fortnite right now. Yeah… recently there was a Fortnite player who admitted that he used a cheat and participated in the Fortnite Champion Series Chapter 2 Season 3 tournament and made it to the finals of the tournament armed with this cheat.

In fact, cheat is now one of the problems that must be faced by online game developers. Yes, because players who have the ability to hack must continue to look for ways to be able to play the game fraudulently. Well, the cheat way is already used in Fortnite in FNCS (Fortnite Champion Series Finals) 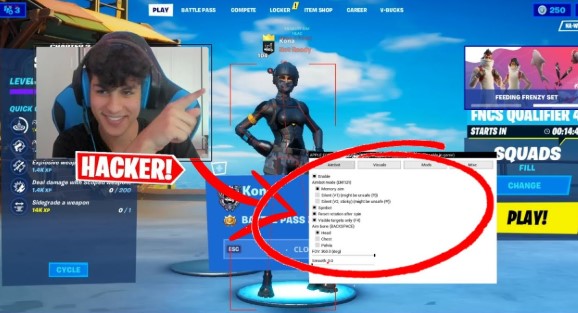 The pro-player named Kona is totally appalling to Fortnite because of his deed. His bad way has been admitted on his official Twitter account @KonaG_. In his tweet published on August 9, 2020 at 6.23 PM, he said that the anti-cheat of Fortnite was so terrible to the point where someone could get to finals. He totally hoped other players could learn from this.

He also showed what kind of cheat program that he used through a live streaming session on Twitch. He also informed what kind of aimbot was currently being used by cheaters in Fortnite games to get kills.

Because of his bad deed, he finally has been eliminated from the tournament. Then, his account was immediately banned by Epic Games. However, this case shows us that the anti-cheat system of this Fortnite Battle Royale game is still very weak and easy to penetrate.

If you are curious to know the video that shows him using a cheat in Fortnite Championship Series Chapter 2 Season 3, you can watch it on Twitch at https://clips.twitch.tv/SquareInexpensiveQueleaJebaited.

What does Epic Games do to solve this problem?

However, this is a serious thing that hit Epic Games as the developer of Fortnite. To solve this problem, Epic Games has made numerous attempts to strengthen the defense against cheating. But, as Kona said, the Fortnite anti-cheat is so terrible.

Of course, his tweet totally leads Epic Games to make an effort to improve and maintain the anti-cheat Fortnite to perform as well as possible, especially in Championship or Tournament. In this case, Epic Games do not want to get a designation as a bad game developer who has a terrible anti-cheat system.

Kona recently competed in the Fortnite Champion Series Solo Qualifier. But, his hope to be the winner is totally so far now. He should resign from Fortnite soon because his Fortnite account has been banned by Epic Games. He also has  a bad image among Fortnite players.

So, it can be a lesson for other players that cheating is a bad way that you shouldn’t do anymore.