The name Kyle Giersdorf suddenly became famous. Kyle Giersdorf, who goes by “Bugha,” is A 16 year old boy who won the Fornite World Cup and now became the best Fortnite player. Who is Bugha?

Bugha managed to become the champion by beating the 100 best gamers in the game Fortnite. He succeeded in making the grand prize of US $ 3 million or the equivalent of Rp. 42 billion (assuming US $ 1 = Rp. 14,000). He also became a millionaire at a young age. That’s so fantastic, isn’t it? 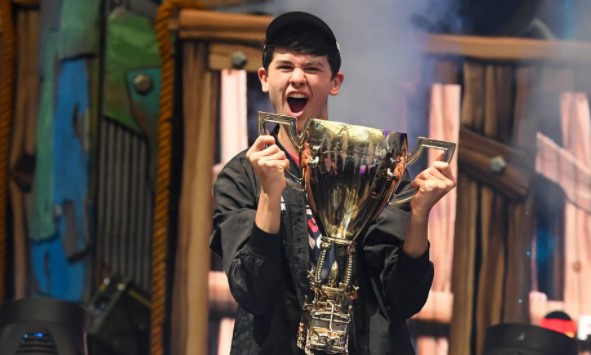 Being a professional gamer has become Kyle Giersdorf’s passion. It was revealed by Kyle Giersdorf’s mother, Darcy to ESPN and was quoted by CBNC International, that he had been playing video games since he was 3 years old, so this was totally his passion. She also stated that he told us he could do this, he put his mind to it and he did it. Finally, he made it more.

However, this success was achieved through hard work. Kyle Giersdorf should spend many hours playing the game every day. At least he plays Fortnite for 6 hours a day while he goes to school and does his chores.

He said that he played Fortnite during school breaks and after school for an hour or two. But, it doesn’t matter because Kyle Giersdorf’s father, Glenn, said he and Kyle Giersdorf’s mother gave their son permission to play Fortnite games as long as they didn’t interfere with his school.

His father always emphasizes that as long as his score goes up, he and his wife will support and they always try to do what they can do for him. Then, if his score at school looks down, his parents will warn there are consequences for that.

In an interview with NBC, Kyle Giersdorf said he has a weekend routine. He will wake up during the day and eat a banana and play Fortnite Creative Mode for 30 minutes to warm up. Afterwards, Kyle Giersdorf will summon his teammates who are named Sentinels to train together. He will call his team and talk to them to discuss what the strategy will be taken. Of course, he stated that this is his job.

If you are so curious to know how he adjusts settings and keybinds that lead him becoming a Fortnite winner. Here are they: