Looking for Midas’s golden llama, which is able to be found between a junkyard, gas station and RV campsite, is one of the many challenges you are able to complete in Fortnite Season 2 Chapter 2. Here is the complete information about the challenge.

In order to complete this one, you have to make sure that you look for the golden llama head once you find it is hidden location of the Fortnite map. It is like how you must search Skye’s swords in stones when you find them. Completing this challenge will reward you 40,000 XP, which will help you unlock the new Fortnite Chapter 2 Season 2 battle pass skins. 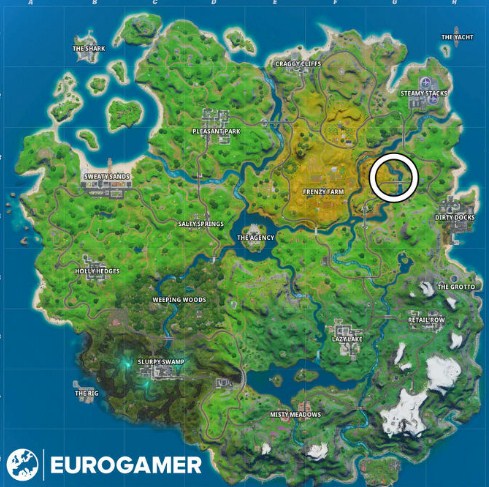 Where is the location of Fortnite Midas’ golden llama at a glance? Midas’s golden llama is able to be found in G3 on the Fortnite map. The place is located in the middle of the triangle created by the gas station and junkyard found in G4 and the RV campsite, which is to the north of this building in G3. Since the Midas’s golden llama is neither a landmark nor a place, it will never show up on the map. Due to this thing it is a great idea to follow the steps on how to find the golden llama in order to make sure that you do not miss out on this challenge. Please make sure you search the golden llama once you have found it or else you will not be able to complete the challenge.

So, how to find the Midas’ golden llama in Fortnite? The easiest way to find the Midas’s golden llama in the game is to land along the road in G3, which is to the east of Frenzy Farm, shortly after you jump from the Battle Bus. Once you land on the road, please go eastward, towards the bridge, and close to that structure, you will find a small building. Then, go inside and you will find the golden llama head on the wall inside the building. Do not forget to look for it or you will not complete the challenge.

Looking for Midas’s golden llama between a junk yard, gas station, and RV Park is just one of the Week 9 Challenges Fortnite players can complete as of Thursday morning. There are some other challenges that you can complete and they are also able to be viewed at the in game Challenge Table. Those include searching Chests in different named locations (six), dealing damage to players with Sniper Rifles (300), searching Midas’ Golden Llama between a junk yard, gas station and an RV campsite (one), upgrading a weapon to Legendary rarity at an Upgrade Bench (one), searching a Llama, Legendary Chest or Supply Drop (one), dealing damage to a Choppa with a passenger or pilot inside (100), collecting XP Coins (five), carrying a Giant Pink Teddy Bear found in Risky Reels 100 meters (100), gathering intel during Spy Games operation matches (10), and earning Survival, Combat or Scavenger gold medals (three).