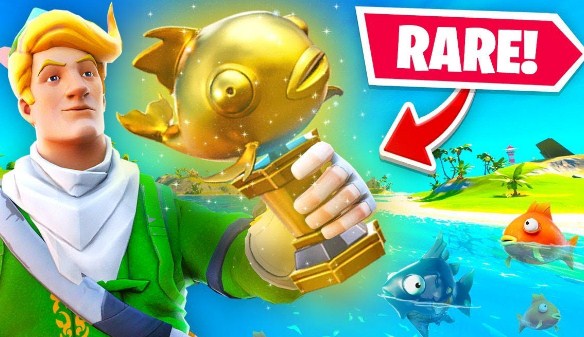 Apparently, fishing is a brand new mechanic and you are able to catch a Small Fry, which heals 25 health up to a maximum of 75, a Flopper, which heals 500 health, and a Slurpfish, which heals 50 health or shield. Aside from that, it is also possible to fish out weapons and rusty cans, which deal 20 damage when thrown.

The Mythic Goldfish is the name of the rarest item in the game called Fortnite with about 1 in a million chance to be fished with either fishing rod or a Harpoon gun and it is one of the mythic weapons in the game along with the Infinity Blade and the DC Marvel and Star Wars limited time weapons, as well as the Chapter 2: Season 2 Mythic Spy weapons. This one does 200 damage per shot and finding one, killing someone with one and being killed by one will all give you an achievement.

Information about Mythic Goldfish that you need to know:

Mythic Goldfish was the first Mythic item in the Chapter 2. The image of this item is based upon a Flopper. For those who do not have any slightly idea about Flopper, it is the name of an Uncommon item consumed to earn half health at a time. This one has a fast recovery time and is recommended in all situations. Flopper is able to be found by fishing in a fishing spot, fishing in the Flopper Pond, fishing in the Coral Cove, and found in a freezer.