A lot of new content has arrived in Fortnite to kick off the start of Season 3. In this season, you need to collect mythic weapons from boss characters, and you will need to fight tooth and nail to get them, or just be incredibly opportunistic.

With the brand new map that you can explore, you will have to know where to look if you want to get a mythic weapon that is best for your play style.

Jules’ mythic drum gun and grappler are placed at the Authority building in the center of the map, where the Agency was previously located. Just like the Agency, it is heavily guarded, and you will need to defeat Jules’ to get it. It is slightly less powerful compared to Midas’ drum gun. This one deals one less point of damage at a lower fire rate and a little less damage to structures, but it will still chew through most things just fine. 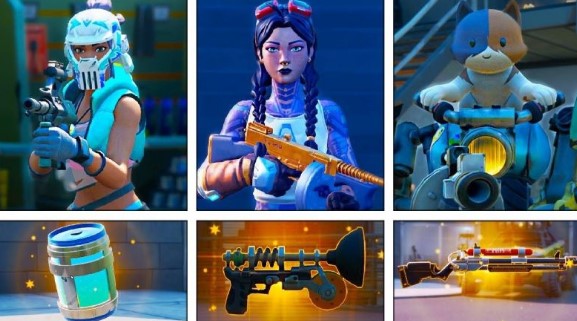 As for the glider gun, it is basically a souped up version of the Batman glider gun. This one has a ridiculous range, and allows you to escape fall damage, but flying around will open you up to attacks.

Ocean is able to be found at the Fortilla location in the southwest portion of the map. You can scan a guard to get their location and defeat them. The ocean will drop the mythic burst assault rifle and the bottomless chug jug. The latter has infinite uses to give you valuable shield points.

The mythic burst assault rifle will shoot in two-shot bursts rather than three, making the weapon’s pure DPS a little bit lower, even though it does do more damage to structures this season. Aside from that, please keep in mind that Ocean is dressed in Brutus’ Ghost faction helmet, making her a little more hard to pick out from the crowd of guards.

Kit is hidden out at Catty Corner, the name of the renovated location where Meowscles was hanging out in Season 2 after being kicked off of his yacht by Deadpool. Basically, Catty Corner is Meowscles’ and Kit’ bachelor pad, and it is positively swarming with guards. As for Kit, he is just a little cat piloting a robotic body, making him hard to distinguish from the guards at first. place Kit by shaking down a guard, and then defeat him.

The thing called Kit will drop the mythic charge shotgun, which has a five-shot magazine instead of three. The charge shotguns that you will be able to find in Season 3 will have a little circular gauge indicating how fully charged they are. Basically, you can hold down the shoot button until the gaude is complete, and then release to do more damage than the average charge shotgun. The exact damage is 150. You will get about 220 damage with a headshot. The shockwave launcher of Kit uses rocket ammo, but essentially acts as a shockwave grenade wherever you fire, which is able to send you or opponents rocketing into the air.