Skip to content
Homepage / Guides / Ninja Collaborated With Astralwerks in Order to Create His First Music Album. What's the Name of the Music?

Do you know that a Fortnite streamer Tyler ‘Ninja’ Blevins has cooperated with EDM label Astralwerks? Astralwerks is an EDM specific label which exists under Universal Music Group. This collaboration is done to create his first music album. You may have heard about this news. But, do you now what is the name of the music album of their collaboration? Let’s find out here.

The name of the album is Ninjawerks. The name of the album is taken from combination words between ‘Ninja’ as Tyler’s popular name and also Astralwerks for sure. This Ninja’s compilation album features such EDM greats as 3LAU who is an American DJ, Alesso who is a famous European DJ and Tycho who is known for his synth and downtempo work. They work together in a series of gaming- themed tunes. Before the album is set to drop in December 14th, 2018, three singles of the album have already been available to stream online. Those singles are Tilted Towers by Alesso which seems that the name of this single is named after the location of Fortnite fame, Jetty by Tycho and Game Time by 3LAU. 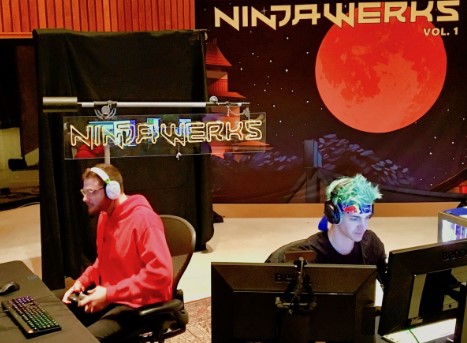 If you are fans of Ninja, you may have heard about this collaboration since Ninja has initially announced about it during TwitchCon 2018 in October. For Astralwerks, this is first collaboration with a gaming personality. Ninja stated that he has a wish that the album is able to be the soundtrack of gaming. In addition, he also stated that he feels that it marks a big step in bridging the gaming and music industries.

In an interview with edm.com, Ninja stated that he was stoked about this project and it is because he truly loves the music. Also, it is because he thinks that this is another big step towards bridging the gap between music artists and gamers.

For your information, this album is available in digital, CD and vinyl formats and it features original artwork and a whole line of additional merchandise.

Ninja is a popular streamer, Youtuber, professional gamers and internet personality from America. His real name is Richard Tyler Blevins and he was born on June 5th, 1991 in Detroit, Michigan, US. He began into streaming by participating in some esports teams in competitive play for Halo 3. However, his fame began to increase when he and a lot of other streamers started playing Fortnite Battle Royale in October 2017.

Now, he has more than 14 million followers on his Twitch with more than 470 million views. But now, he does not stream on that platform anymore. Since he is now also a Youtuber, he has Youtube channel which has more than 22.3 million subscribers with more than 2.1 billion views. Ninja announced that he would be leaving Twitch to stream on Mixer and he announced it on August 1st, 2019. On Mixer, Ninja has more than 1.7 million followers and he becomes the most followed streamer on Mixer. He can be the most followed in less than a week after the announcement that he made.