Skip to content
Homepage / Skins / Ninja Reacts to His Own Skin

Tyler Blevins or Ninja is considered as one of the well-known streamers in the world, and much of his success has to do with a thing called Fortnite. Just like Fortnite, Ninja is a phenomenon. To appreciate his merit to the game, Fortnite made a skin based on the popular player named Ninja.

Ninja told the audience about his playable, virtual twin during a Wednesday morning stream. How did Ninja react to his own skin? When the player made the big announcement on his stream about his own skin, he shouted that the thing finally happened, and it is official that we finally got a Ninja skin in the game called Fortnite. At the time, he looked so happy, excited, and hype, to the point he shouted and stood up many times, expressing how happy he was getting his own Fortnite skin. 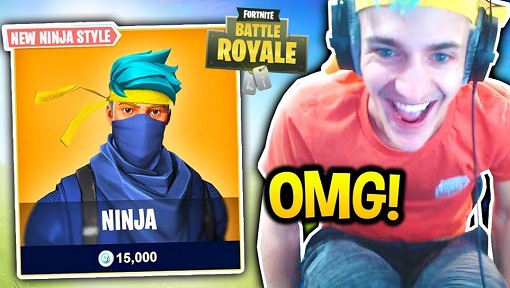 Aside from that, Ninja also posted on social media writing that he has dreamt of having a skin in Fortnite since he started playing the game. Gladly, his dream has become reality. If you want to see how hype Ninja reacts to his own skin, you can watch a video on Youtube posted by a channel named Eports Talk on January 15, 2020. Since the first time its release, it has earned 32,2015 views and 733 likes.

About his own Fortnite skin, the player thinks that the skin looks just like him with the spiked blue hair, a blue sleek jacket with a hood and a Ninja logo printed on the sleeve, and a black jeans. Apparently, there are four variations of the skin, including one wielding two katanas.

The sad news is that Ninja skin is not available to be purchased anymore. This one was only available for a limited time, between midnight on January 16 and 01:00 on January 19. If you are curious about Ninja skin and want to see it, you can try to check out Ninja profile and see if he is still using his own skin now.

The Ninja skin is the first of the icon series, which will bring the real world personalities to Fortnite. Epic Games gave a hint that the two streamers known as Loserfruit and TheGrefg are among many that will be part of the series in the future.

Epic Games has a great plan and they do not stop at video games. They said they will collaborate with not juts gaming personalities, but stars and personalities of all sorts, citing its previous collaborations with DJ Mashmallow and Major Lazer. In the past, they also has teamed up with Disney, hosting Avengers and Star Wars themed events. In addition, they said that this is just a beginning of gaming, film, music, and fashion colliding in Fortnite.

Actually, Epic Games is not the only one collaborating with big names and superstars. Last year, one of the most popular games with a huge following called League of Legends announced its own skins designed by luxury brand Louis Vuitton.