Do you like Ninja who is a Fortnite player and streamer? If so, you may want to have the merchandise of him. If you are his fans, it is important for you to know the official merchandise of him and also where you can buy it. So, here we will inform it for you.

Richard Tyler Blevins or known as Ninja has launched his own merch website on September 16, 2018. He did it after high demand from his millions of fans. If you are one of Ninja fans, now you are able to purchase official merchandise from him. He was just able to launch his own line merch in 2018 even though numerous deals with various companies and sponsorships including through esports organization Luminosity who Ninja is still a member of. 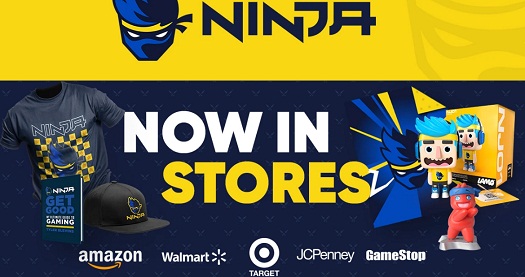 In the his website, there are some items listed. There are posters, hoodies and three t-shirts which are the first items part of the Signature Collection which are available in youth to adult sizes and appear to be unisex. How about the prices of the merchandise?

Ninja announced the website of his merchandise on his Twitter on September 16th, 2018. If you access the site now that you can be accessed at teamninja.com, you are able to see that in the site you are able to see the items that he sells now including t-shirt, book, cap and a figure. In the site, it is also stated that you are able to buy these items in some stores such as Amazon, Walmart, Target, JCPenney, Game Stop, Ardene, Hot Topic, Primark, Giant Tiger and Spencer.

It is important for you to know that personal merchandise is something common for esports content creators to get additional revenue. But, it is less common for streamers to be able to launch a dedicated website and brand, rather than generating stickers, shirts or other low cost merchandise through a third party service. As we all know that in 2018, Ninja as a popular streamer has grown his personal brand into a household name amongst gamers. There are some sponsorship deals that he has with Red Bull, Uber Eats, Samsung and PSD Underwear. His personal appearances include music festival Lollapalooza and a meet and greet at a Detroit Lions game. During that time, he tried to maintain one of the most famous channels on Twitch and he was able to accumulate more than 187 million hours watched.

So, if you fall in love with the merchandise of Ninja or you may be one of Ninja fans, you are able to buy the items. You are able to check his website and also find the items in the stores that we mentioned above. It is important for you to know that when he launches the new items for his merchandise again, you have to grab it fast since it may be sold out soon. So, it is recommended for you to follow his social media such as Twitter, Youtube, Twitch to get updated about the information of his merchandise.