Recon Expert is the name of a Rare skin in Fortnite Battle Royale that is able to be purchased from the Item Shop. Do you want to know more about Recon Expert? Do not stop reading the article as you will be found out the answer.

Talking about the appearance, Fortnite Recon Expert can be described as a female skin presented by a military woman with dark skin. It is wearing a whitish pale sleeveless sports shirt with a start emblem in khaki colors and pale greenish trousers with lines as a decoration. This one is protected with iron insets o her legs right on the lace up shoes over-protected with an iron inset on her left leg. The character has khaki fingerless gloves with a programmable screen on her right hand. The girl is carrying a placed backpack and there is also a hat protecting from the sun. In addition, there is an identification disc on her neck, so she is able to be easily recognizable in case if something bad happened. Basically, Recon Expert looks like a common soldier overall. 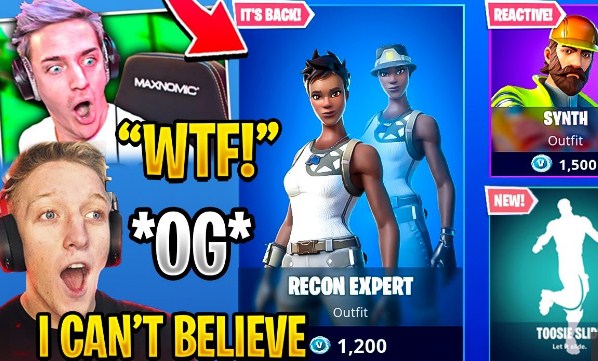 Recon Expert is used to be the rarest skin in the game until she returned on May 27, 2020. Is there a OG style for Recon Expert? There is no such a term. In the Fortnite v12.60 update, it was given a new style without her hat.

While the newer players will be happy to be able to add this anthology skin to their lockers, the comeback of Recon Expert is sure to rekindle the debate over the rarest skins. Some OG players of Fortnite believe that particular skins should remain rare forever and only reward the very first players. However, Epic Games has made the choice to give back access to this highly prized cosmetic, so you can expect to see more than one Recon Expert in your next games.

Talking about the OG skins and OG style, the good example is a pair of Halloween skins called Ghoul Trooper and Skull Trooper. Both of them were released in 2017 before the battle royale version of Fortnite was the global phenomenon it is now. They became two of the most sought after skins in the game, because they were not sold again after that point. It means only OG players had them.

Not only did it come back, but Skull Trooper also had multiple color variants, including OG style. Basically, there are two new styles: the green glow that is available to everyone and the purple glow that is exclusive to those who owned it previously. As for Ghoul Trooper, there are also some new variants to give the OG players something to show that they were there way back then.