Primo Moves is the name of a Rare emote in the game named Fortnite Battle Royale. This one is able to be purchased from the Item shop. It is most likely based off the dance seen in the movie entitled Breakfast Club.

Primo Moves Fortnite has made its return to the Fortnite store. Are you wondering how much would it cost to get the emote for your favorite skin? Just like many emotes, this one will not cost as much as a skin and it is only a rare level emote, so it is even cheaper.

For your information, the Primo Moves emote costs 500 V-Bucks. This one is currently in the Fortnite store for another day at least, and first arrived in early March. Each player is able to plan on it leaving for the whole summer before it returns. For those who are interested in getting free cosmetics, the developer of Fortnite called Epic Games added challenges for players to gain cosmetics for certain skins. 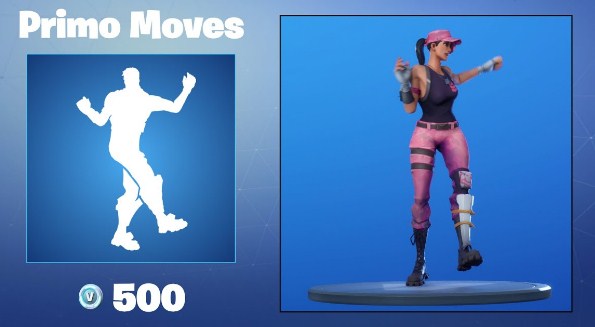 Just like many multiplayer video games today, Fortnite features emotes, which allow the players to pose their characters for the other players. Those range from simple gestures like waving your hand, to the complex one that mimic dance moves.

A few dances of Fortnite came with the game when it was new, and more have been added over the past few years. Every Fortnite dance is able to be purchased with V-Bucks, and in game currency that can be purchased for real money. They do not give competitive benefits in the game, but they are fun to pull off, especially when taunting your opponents.

Even without any real gameplay use, the Fortnite dances have become an amazingly popular part of the game, and in the Fortnitemares Halloween event last year, players were invited to visit gargoyles throughout the map, where they would strut their things with the dance moves of the game in order to complete the extra challenges.

While the dances of Fortnite have been around since the game was launched for the first time in the mid 2017, the trend of actually dancing these moves in the real life only really came around in 2018. This one started on March 30, 3018, when Epic Games launched a contest known as the Boogiedown Challenge, in which player would upload videos of themselves on social media with the hashtag #BoogieDown. The winner of it would get their dance recreated in the game as a dance emote, while the other ones got V-Bucks and cosmetic customization items for their game characters. The social media was flooded with videos of kids and teenagers showing off their dance moves because of the contest.