OG stands for Original Gangster. Recon Expert OG variant means the skin called Recon expert that was released a long time ago, having one meant that you have played for a long time and is thus considered a pro gamer.

As you probably know, Recon Expert has been known as the rarest skin in the history of Fortnite. it has been almost two and a half years since it first appeared in the Item shop, but today the amazing skin has re-returned. The developer of Fortnite called Epic Games has put the cosmetic back on sale. All free to play games have their extremely rare skins like Recon Expert, which only some OG players have. This skin had not been in the store for almost two and a half years. 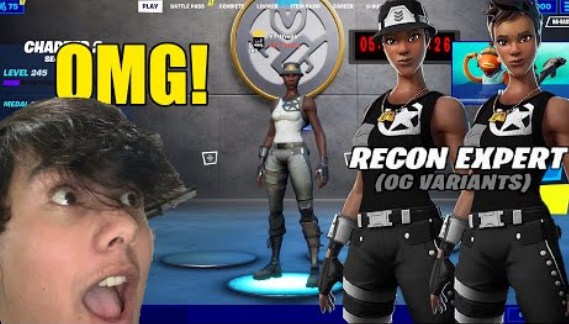 On May 27, 2020, Epic Games decided to give players a chance to get Recon Expert back. On the occasion of the release of the skin variant with a hat, the editor has redeployed the skin. As the contrary to the collectors who are happy to be able to add this anthology skin to their inventory, some OG players think that certain skins should remain rare forever and only gift the very first players. In fact, the return of the Recon Expert has become the hot topic in the debate over the rarest skins.

Talking about the OG skins and its variant, you cannot exclude a pair Ghoul of Halloween skins called Trooper and Skull Trooper were released in 2017 before Fortnite Battle Royale was the global phenomenon it is now. Both of them became two of the most sought after skins in the game, because they were not sold again after that point, meaning only OG players had them.

The thing is, Fortnite made a big deal about the return of Skull Trooper. Not only did it come back, but it had multiple color variants, including one just for OG owners, it had a female version named Skull Ranger, and even its original Scythe came back as well. Basically, there are two new style options when it comes to Skull Trooper. The first one is a green glow that is available to everyone. The second one is a purple glow that is exclusive to those who owned it previously. So, for those OG players who are mad about this skin returning you will have that as a unique feature to show off your old ways. Not only are there new variants, you are able to unlock the long leaked Ghost Portal back bling. To make it happen, you will need to complete some Skull Trooper challenges.

A year later, Ghoul Trooper came back. This certain OG skin made its way back to the game for Halloween 2018 along with some new variants to give the original owners something to show that they were there way back then, before Fortnite blew up. Ghoul Trooper has returned to the Item Shop, once again sporting new styles that will help distinguish OG owners.