Fortnite Recon Expert can be defined as a female skin presented by a military woman or a female soldier with dark skin. The girl is wearing a whitish pale sleeveless sports shirt with a start emblem in khaki colors and pale greenish trousers with lines as a decoration. She is protected with iron insets o her legs right on the lace up shoes over-protected with an iron inset on her left leg.

Furthermore, Recon Expert skin has khaki fingerless gloves with a programmable screen on her right hand. This one has a placed backpack and there is also a hat protecting her from the sun. Beside, there is an identification disc on her neck that can make her to be easily recognizable in case if something bad happened. 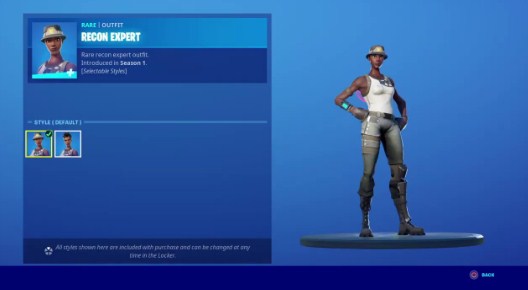 The players of Fortnite who have Recon Expert and Fortnite data miners noticed that during the Fortnite v12.60 update, this skin received a brand new style. This new one touched up on some of the textures of the skin, as well it removed the hat of the Recon Expert. Actually, the players do not know what to make of the new style, as they have seen Epic Games do this with the other classic skins in the past, such as Ghoul Trooper.

Basically, there are two selectable styles of Recon Expert. The first one is the one with hat (the icon before Fortnite v12.60 update) and the second one is the one without hat (the icon after Fortnite v12.60 update). In the term of design, this skin is just a reskin of the Banshee model with the option to have a hat or no hat.

For those who do not have any slightly idea about Banshee, it refers to a Common Fortnite skin. This one is the unofficial name of this default skin that you are able to potentially use when not choosing a skin in the game Fortnite Battle Royale. It is unofficial because the name is used in the Fortnite Save the World mode, but is never really referenced in the Fortnite Battle Royale. Default skins are usually called as no skins due to the fact that you are not wearing a skin. It is usually in a negative connotation and describes players that are new to the game because they do not have a skin. Actually, there is also now the term known as “fake no skins”. They are good players at the game who purposely do not wear a skin to make the other players underestimate them.

For those who love something like soldier skin and have not gotten Recon Expert in your inventory, it is time for you to grab it now as it is now available in the Item Shop. There is a limited time so make sure to get it before it is gone from the store for another two and a half years.