Riot Control Baton is one of the harvesting tool in Fortnite: Battle Royale. But now, you may see that there is something wrong with this. What happen with the Riot Control Baton? We are going to figure out about it. 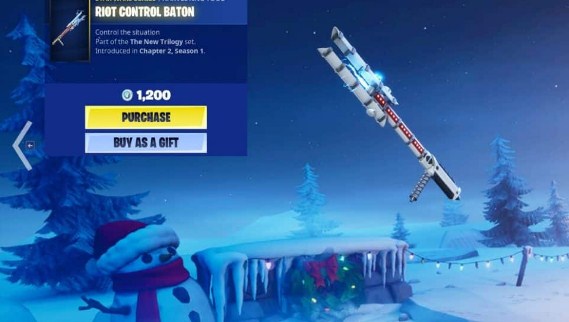 According to Fortnite Tracker site, here is the sale history of Riot Control Baton.

Recently, have you heard that if you equip this pickaxe, other players will not hear the footsteps of your avatar? Yes, it is true. If you use Riot Control Baton, it will cause you to no longer have audible footsteps. So, other players cannot hear the footsteps of a player with Riot Control Baton approaches. It makes players think that this situation give a competitive advantage over the opponents in the game. Even some players have given critics it as being ‘pay to win’. However, this thing happens not unintentionally which means that it happens as a result of a bug.

Because of this bug, Epic then was quick to get on this issue and then they announced that it was making the Riot Control Baton show up as a default pickaxe in all game modes. It seems that they are trying to fix this bug and maybe players will be able to get to use the pickaxe again but of course once the footsteps sound issue is fixed.

While we work on resolving an issue, the Riot Control Baton will appear as a default Pickaxe in all playlist. We’ll update you here when the issue is resolved!

For your information, it is not the first time players have complained about item which gives certain players an advantage in the game. In some cases, it happened because of the nature of the item rather than a bug.

If you want to see Riot Control Baton gameplay in Fortnite, you are able to watch videos on Youtube such as: