Usually, the players of Fortnite look up to the popular Fortnite players when it comes to edit course. Ever since the release of the Fortnite’s Creative, many content creators on Youtube made maps for the community to use for practice or challenges. One of the most popular ones is called Mongraal.

Mongraal known as one of the most popular Fortnite pro players. His real name is Kyle Jackson. He is a British eSports teen who mainly okays the game called Fortnite. The boy born on August 13, 2004 (age 15). The player is known for his plays and aggressiveness in the game. A lot of players look him up due to him playing very well at a young age. At the age of 13, the boy had found success and was featured in BBC News. When being interviewed, he said that he goes to school normally and can do every subject well. As he can balance between school and play games, his parents do not need to worry about his school. 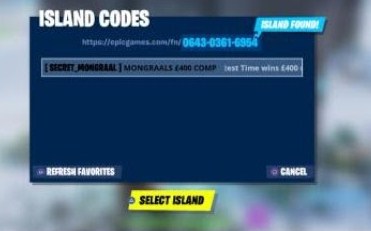 Talking about Mongraal as a pro player, he was a player for Team Secret (joined in April 2018), but the player decided to leave the clan on July 7, 2019 to join another well-known team called FaZe Clan.

Just like any edit course, the edit course of Mongraal comes with a code. There is an edit course called Mongraal Edit Course that was created by the creator called Secret Mongraal. The code of it os 0643-0361-6954. You are able to enter the course by starting a Creative Server. Then, look for the featured Island Rift. The next thing that you need to do is to open Set Island Code and enter the code of Secret Mongraal which is 0643-0361-6954. If you manage to win the course and you broke the record as the fastest player to win the course, you will win $ 400. Are you interested in taking this challenge and bring the reward home? Go try the course now. For further information about the edit course of Mongraal, it is better for you to follow the official social media accounts of Mongraal. If you have any questions, you are able to ask him through those accounts. If you are too shy to contact the player, you might want to seek a help from the community.