Shark skin Fortnite refers to Chomp Sr. Chomp Sr. is the name of a Legendary rarity Fornite skin. You are able to get it from the Item shop. This one is included in the Chomp set. It was released on July 23, 2018. 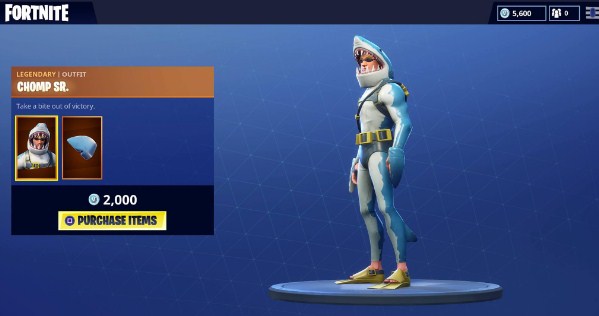 Who is Chomp Sr.? Chomp Sr. is known as a Legendary skin for male avatars in Fortnite. This one is a man in a shark costume. He is wearing a shark hood and there is a fin on his back. This skin is made in light blue. Aside from that, the costume is decorated with details, a variety of straps and buckles.

Answer: You are able to get this one from the Item Store.

Answer: This one is able to come back in the Item Shop. All that you have to do is to stay tuned for store updates.

Chomp Sr. is related to Shark Week that kicked off its 30th weekly celebration of the ocean killer on Sunday. As players will spend a week learning about the amazing power of great whites and the other marine predators, the players of Fortnite are able to have a bit of shark fun of their own. The developer of Fortnite called Epic Games joined in the celebration of Shark Week on Saturday and when it released the Chomp Sr. skin in the Fortnite in-game store. The shark skin costs 2,000 V-Bucks, or $20, with the shark on a spear pickaxe named Chomp Jr. sold separately for another 1,500 V-Bucks, or $15. Aside from that, there is also the Snorkel Ops skin available in the store for 1,200 V-Bucks or $12.

Some players of Fortnite took it upon themselves in order to make their own shark infested waters with the use of the skins. A Twitter account called dakotaz posted a screenshot of a downed player in Loot Lake wearing the Snorkel Ops skin, which has a shark fin protruding from its back. A user of Reddit posted a similar thing over on the Fortnite subreddit. The pict shows three dorsal fins from the skins coming out of the water in Paradise Palms.

In its 30th year, the program known as Shark Week is named as the longest running program in the cable TV history. The series filled with true and not so true facts about the ocean predator makes a big splash every year. This one officially starts Sunday at 8 p.m. eastern on the Discovery Channel. The thing also happens to be the time when Epic Games switches skins in the Item Shop so there is no telling when Chomp Sr. will be available for purchase again.