Skip to content
Homepage / Skins / Should I Buy Recon Expert

After about 900 days, the rarest skin of Fortnite known as Recon Expert has returned. This skin has finally reappeared in the Item Shop. Normally, Fortnite updates at night in the U.S. But for a few reasons, the skin called Recon Expert was added as an early morning surprise at around 4AM CT. How much does the Recon Expert cost? According to Epic Games, it costs 1,200 V-Bucks and even comes with a variant, which equips the skin with a hat.

For those who forget about Recon Expert, this one was first sold in October 2017. It was right after the battle royale mode for Fortnite initially released. The skin has not appeared in the store since November 11, 2017, which was right before Fortnite exploded in popularity and player population. 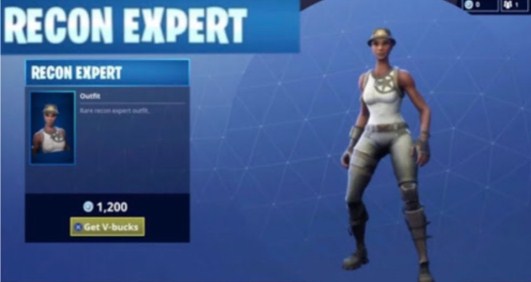 For your information, only the true early veterans of the battle royale game would have had Recon Expert before today, making it one of the rarest in the game. From now on, please do not be surprise if you see dozens of Recon Expert running around.

In fact, rare skins are hunted down by avid players of Fortnite and often seen as a point of pride. A few skins like Ghoul Trooper and Skull Trooper were highly sought after due to their rarity until the developer of Fortnite called Epic Games re-added it to the store due to high demand. What Epic Games did it such a smart strategy to sell V-Bucks, though, and it works well.

Should you buy Recon Expert? For those who hesitate whether you should buy Recon Expert or not, the decision depends on you. Some people suggested to not  buy this skin for the rarity, or the hype which will die out in about a week. However, if you like those sort of skins you can buy it.

Fortnite Recon Expert refers to a female skin presented by a military woman with dark skin. The girl is wearing a whitish pale sleeveless sports shirt with a start emblem in khaki colors and pale greenish trousers with lines as a decoration. She is protected with iron insets o her legs right on the lace up shoes over-protected with an iron inset on her left leg. The skin has khaki fingerless gloves with a programmable screen on her right hand. She has a placed backpack and there is also a hat protecting her from the sun. Aside from those, there is an identification disc on her neck that can make her to be easily recognizable in case if something bad happened. In general, Recon Expert looks like a common soldier.

Before purchasing Recon Expert, please ask yourself twice whether you love or need it or not. Do not regret your decision later.