Slumber is the name of an Epic skin in the game called Fortnite Battle Royale that is able to be obtained in the item shop for 1,500 V-Bucks. This one is based on the shooting stars at Starry Suburbs. The skin has two edit styles, Ninja and Pillow. The Ninja one is basically a living star with a purplish-pink color scheme and a headband on the head of the star. As for the Pillow one, it is basically a living star with a combination of large bulky blankets and mattresses. 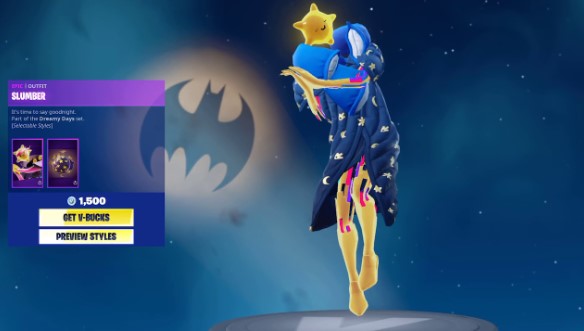 Slumber skin is part of the Dreamy Days set. The set includes a total of 5 cosmetics that is broken up into 1 skin (Slumber), 1 glider (Nite Flight), 1 harvesting tool (Nighty Night), 1 wrap (Dreamy), and 1 back bling (Dreamer). Slumber skin definitely looks good when combined with the other cosmetics of the Dreamy Days set. However, you might be wondering if it would look good with the other cosmetics.

For those who are wondering what kind of Fortnite cosmetics that look best with Slumber skin, here are some combos of Slumber skin.

Feel free to try any combo of Fortnite Slumber skin that you think the best. If you are interested in the Combo 1, check out if you have the items mentioned and be ready to get them if it is possible. Before anything, it is better for you to read the explanation of the Fortnite cosmetics included in the combo.