For those who have been working your way through the first set of Agent challenges, then you may be wondering how to steak security plans from something like The Rig and deliver them to something like Ghost in Fortnite. 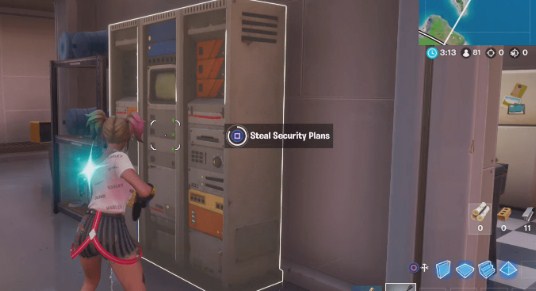 You will have to take on this mission in Solo, Duos, or Squads, as the mission involves infiltrating one of the named bases and stealing security plans, before delivering them to one of the factions that has been introduced in Fortnite Chapter 2 Season 2. The way to complete the job is not obvious, as it involves some new mechanics which have only just been added to Fornite, but if you follow the guide then you will be explained exactly how to steal security plans and deliver them to either Shadow or Ghost in Fortnite, so you are able to wrap up the final mission of Brutus.

The server of The Rig cannot be found, despite tracking down lots of other machinery, please so check for the updates later or use one of the other two locations. If you want to steal security plants from The Yacht, you can enter The Yacht via the bottom rear deck, then go through to the middle of the lower level where you will find the servers. If you want to steal them from The Shark, you need to go in through the mount of The Shark, then head up the stairs and though the security door, before turning left where you will find two rooms of servers.

Once you have got the security plans, you have to deliver them to Shadow or Ghost. Rather than going to one of the safe houses, however, you have to drop the plans into one of the mailboxes that have appeared around the island. there should be at least a Shadow and a Ghost drop in each named location, and although the map is not exhaustive it covers one of each for the areas nearest the bases where you will be stealing the security plans. If you want to deliver to Ghost, please choose light mailbox and you will have completed he Brutu’s final mission.