Fortnite held its second weekly Party Royale concert on Friday night, and it was even bigger than the Diplo festivities the week before. More than the course of a 55 minute setlist, EDM artists such as Steve Aoki, Dillion Francis, and deadmau5 took to the virtual stage to perform a lot of old school and current songs that got the crowd moving. In case you missed the event, here is the full recap of it as it happened.

About 30 minutes before the schedule of the second weekly Party Royale start time at 9 o.m. EDT on Friday, the players of Fortnite were able to make their way to the lobby of the event and set themselves up at the Main Stage. When the event started, actor and Fortnite fan Jordan Fisher offered a brief message to describe what fans were about to see. Steve Aoki, Dillion Francis, and deadmau5 performed three entirely separate sets in that order until about 10 p.m. flossing and bright lights abound, the players floated and buzzed around the area while each set continued without interruption. 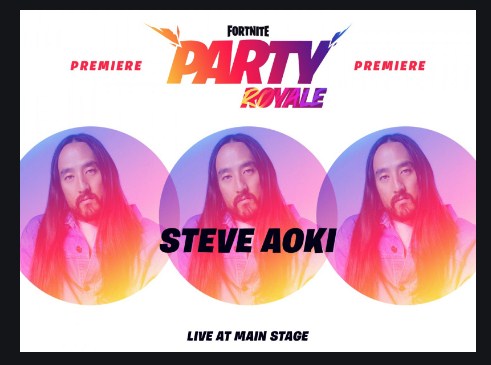 Here is the full rundown of each song played during the second weekly Party Royale event.

The night was over, but the crowds who had been actively playing Fortnite leading up to the concert were given a special gift they are able to keep forever. The Neon Wings back bling is available to all players who log in to the game through May 11 at 10 a.m. EDT. Even if you do not attend the show yourself, this cool back bling is able to be yours whenever you want it. And if you would like to see the performances from the perspective of your favorite skin,a  live replay is set to take place May 9 at 2 p.m. EDT.