Each free to play games has their own extremely rare character skins that only the best players own. In the case of Fortnite, it is the skin called Recon Expert. On May 20, 2020, the developer of Fortnite called Epic games decided to give players the chance to purchase the skin again.

With a lot of amazing skins in Fortnite, you may be curious what is so special about this basic looking skin. Recon Expert features a simple white top, dog tags around the neck, gloves and a relatively small hat. However, the appearance of the skin is not what makes it so rare but the difficulty on how it can be obtained is. 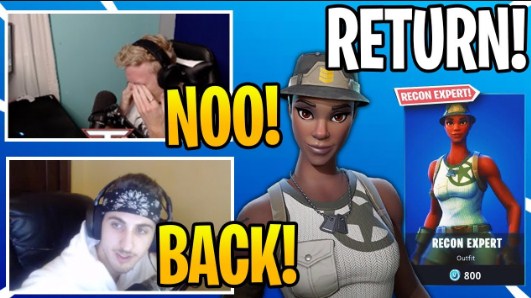 Recon Expert was first released in October 2017, just a few weeks since the Fortnite Battle Royale was launched. This one was featured in the game for more than a month but was removed just as the game was starting to earn fame. Since it was only purchased by the original players of Fortnite, it has gained the reputation of being the item of the collector.

Since Epic games added this skin back discretely and did not even release a teaser or a tweet to notify fans that the skin was returning to the shop like with most of the other skins that have made a comeback in the Item Shop (they have either shared a teaser tweet or they have released a teaser image of a video in order to create some buzz around the release), a lot of people were shocked. Normally, the developer updates Fortnite at night in the U.S. But for a few reasons, Recon Expert was added as an early morning surprise at around 4AM CT. The main reason behind it is probably to surprise the fans, as a lot of people thought that the developers would not ever add the Recon expert back into the Item Shop.

Aside from getting surprised, they also have mix reaction. While the new players of Fortnite or the collectors of Fortnite skins are getting hyped on getting the skin, the longtime players of Fortnite are saddened at the Epic games for taking away what made Recon Expert so special, which is its rarity. They think Recon Expert is not a special thing anymore as there is no difference between them OG players and the ones who purchased it now.