The latest challenges that have been published in the game called Fortnite for Week 5 are the Meowscles’ Mischief Challenges and with the weeks before, there are 10 to be completed this week and there will be another 10 challenges released next week for the Agent.

Surviving a fall from at least 5 stories high is one of the challenges that you have to complete for Week 5 and there are a few different methods in which you are able to complete this challenge, which can be seen below.

How and where do you survive a fall at least 5 stories high? As mentioned before, there are a lot of ways in which you are able to complete this challenge and one of the easiest ways to complete it is to jump from either a bridge or from building a ramp into the water. For those who jump into water, you will not take any fall damage, but you have to make sure you land in the water and not on the land on the sides as you will die. 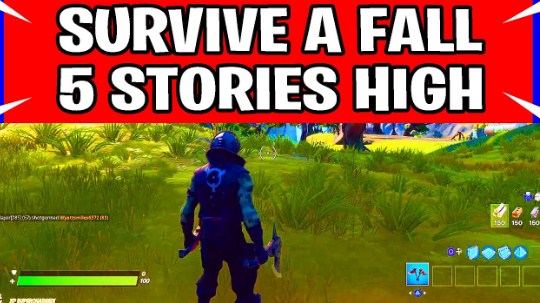 Aside from that, you are also able to land on the top of a building and jump into objects you are able to hide in, such as haystacks and dumpsters. Another option is to jump on the umbrellas so you do not take any damage. There are buildings that you are able to jump off on in Lazy Lake and land on umbrellas in order to break your fall. If you want to complete the challenge of Week 5, you will have to do this nine times, which should be quite easy to complete, especially you go into Team Rumble matches.

As stated before, survive fall from at least 5 stories high is one of the challenges that you have to complete for Week 5. The other one include searching Chests at Misty Meadows or Salty Springs, eliminating players with Assault Rifles from at least 50 meters, consuming fish to gain health or shields, dealing damage to players while using Creepin’ Cardboard, dealing damage to Henchmen with Pickaxes, visiting Coral Cove, Stack Shack, and Crash Site without swimming in a single match, kicking a soccer ball 100 meters, dealing damage to players using Miniguns, and visiting Shipwreck Cove, Yacht, and Flopper Pond.

If you want to know the Week 6, here are the challenges. First, search Chests at Frenzy Farm or Steamy Stacks. Second, deal damage to players using Assault Rifles. Third, search a chest within 10 seconds after landing from the Battle Bus. Fourth, deal damage to players while riding in a Choppa. Fifth, catch a weapon, a can, and a fish. Sixth, eliminate opponents at the Yacht or Salty Springs. Seventh, destroy dog houses. Eighth, block damage with a Decoy Grenade. Ninth, dance at Lake Canoe, Camp Cod, and Rainbow Rentals. Tenth, ride the Steamy Stacks, a Zipline, and use a Secret Passage in a single match. To know more, please visit Epic Games’s official website.