Now, the Teamfight Tactics Rise of the Elements Set 2 Season of the game is live. There are a lot of new champions, classes, traits and origins added and we will share you some of them. So, you have to make sure that you read this until the end.

TFT seems will change things up periodically. It means that they will be removing certain champions and classes and swapping in new ones. Some champions will stay in the game. However, they will get new classes or origins and possibly new abilities. If you want to know the complete information about all the champion and class in one place, you are able to check the cheat sheet that can help you in Pro Game Guides website. In that site, you are able to click on the image to be able to enlarge it. 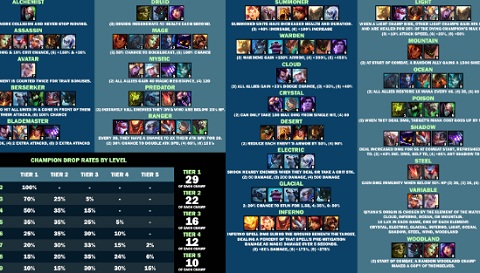 Now, we are going to inform you about the Rise of The Elements Set 2 Champion List and here they are.

Abilily – Sap Magic (passive): When Maokai gets damaged by an enemy spell, his next attack can heal him.

Ability – Fury of the Dawn: Nasus enrages temporarily, obtaining bonus health and damaging adjacent enemies each second for the duration.

Ability – Lighting Breath: Ornn can breath lightning in a cone in front of him, destroying enemies and increasing their opportunity to be critically struck for the next few seconds.

Ability – Cull the Meek: Renekton destroy adjacent enemies and can heal himself for each enemy hit.

Ability – Seismic Shove: Taliyah can erupt the ground under a random enemy, knocking them toward her if ranged or away if melee.

Here is the list of Rise of The Elements Set 2 Classes. But we just share it some of them.

Innate: Alchemist ignore collision and do not stop moving.

Innate: At the beginning of combat, Assassins can leap to the farthest enemy and they obtain bonus Critical Strike Damage and Chance.

The Origin Element of Avatar is counted twice for Trait bonuses.

In the list below, we have some information about Rise of the Element set 2 Origin.

The champions of Crystal have maximum amount of damage that they are able to take from a single hit.

The champions of Desert can penetrate armor.

There are still more information about it so if you need the complete information, you are able to access Pro Game Guides and other sources.