Fortnite weapons include the shotguns, snipers, assault rifles, SMGs, rocket and grenade launchers and many more. In this article, we are going to share top 10 best weapons in Fortnite. So, you are going to always know which guns deal the most damage to the head and body areas of enemy.

It is nothing to mess around with boasting a damage rating 110, more than capable of taking out an unshielded player with a single hit.

This weapon is as one of the best Fortnite weapons because it’s not lacking in any area. It come with 44 base damage at the lowest rarity. We are able to say that this weapon is one of the most powerful and a pretty high fire rate. 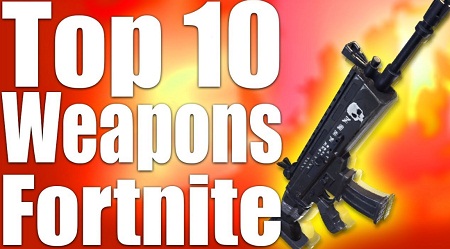 With the fastest firing rate in the entire game, you cannot beat the Compact SMG when you are in close quarters. It is great for tearing through opposing structures if you have already got enough ammo stashed up. This weapon will take less than a second of constant fire to kill another player. Even, with their shields at full strength.

If you are lucky enough to find an Epic or Legendary variety of the Grenade Launcher, so you have got yourself a game changing weapon, especially if you are able to manage to stick around until the very end of a match. This weapons is able to decimate structures. Besides, it is able to kill an enemy in a single hit, if you have  managed to acquire an Epic or Legendary Grenade Launcher.

Shotguns definitely are not for everyone in Fortnite, especially if you having got amazing reflex times. If you are a dab hand at aiming very quickly, so this Heavy Shotgun is perfect for you. It can take out an opponent in a single point blank shot.

This Suppressed Submachine Gun is able to kill in merely a second at close range, especially if you have got the Uncommon or Rare version of the weapon.

This Suppressed Assault Rifle has surprise element. Apparently, it was not added to Fortnite Battle Royale too long ago, but it is definitely become one of the best weapons in the game in that short period of time.

It is able to wreak havoc on any player, especially if they are hiding behind a structure at the end of the game. This weapon is able to make for a hell of a one-two punch, if you follow it up with a burst from an automatic weapon.

It is devastating in Fortnite with a 150 damage rating at minimum whenever you score a hit. If you are accurate, you are able to wrack up kills quickly.

With a 35 damage rating at minimum, the SCAR version of the Assault Rifle is able to deal some heavy damage from the range.