Who is not familiar with this one public figure which dedicates his life as a musician. Yeah… He is Travis Scott which has become popular in Fortnite too. So, what is the relation between Travis Scott and Fortnite?

Definitely, if you are a Travis Scott fans, you already know why he becomes one of the hottest figure on Fortnite. Then, who are Travis Scott?

Travis Scott is well-known as the American popular rapper, singer, songwriter and record producer. He was born on April 30, 1992 (age 28) in Houston, Texas US. Scott signed in his first major-label deal with Epic Records. In November of the same year, Scott also signed a deal with Kanye West’s GOOD Music as the part of its production with Very GOOD Beats. Then, Scott signed a record deal with T.I.’s Grand Hustle imprint in April 2013. 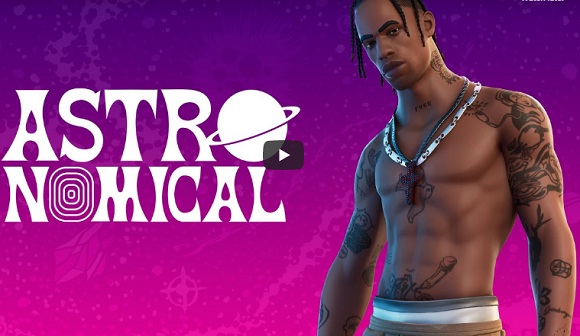 Then, how is the relation between Fortnite and Travis Scott?

Evidently, Travis Scott has a project with Fortnite to present on stage in Fortnite concert. The concert definitely took place in various parts of the world from 23 – 24 April. Then, now, the concert was over.

Formerly, Epic Games have announced the time and date for Travis Scott concert. The concert was named the Astronomical Concert as an experience which is inspired by Cactus Jack’s creations created from the ground up in Fortnite. (Cactus Jack is Scott’s record label)

Surprisingly, more than 12 million users attended in Travis Scott’s Fortnite concert. Definitely, it also broke a record among other concerts that have been held in Fortnite. In this case, the Epic Games was not wrong by choosing Travis Scott as the figure on the Fortntite stage. This game developer also confirmed that this is an all-time record for the Battle Royale Fortnite game.

So, we can conclude that Travis Scott performs as perfect as possible to make the Fortnite player entertained with him. With this number, it also can be a parameter in which most of Fortnite players really love with this kind of music performed by Travis Scott.

As we have known that the previous record holder in last year is Marshmello concert that reached for 10.7 million virtual attendees. Then, for this year, the Travis Scott was successful to break the record up.

In fact, the virtual concert appertain with the release of his latest single, that’s “The Scott” featuring rapper Kid Cudi who also presented in the Scott’s Fortnite concert. Then, more that 12 million players participated live in Scott’s Astronomical concert.

By this Scott’s concert, the Fortnite game allows up to 100 players to fight individually or just as part of team to be the last standing on the virtual battlefield. Known that the Scott’s next four concerts had taken place on Friday and over the weekend in last month.

Besides, a big number of 12 million on live concert, many people also saw the concert outside of the game. Thanks to the Streamers and YouTubers that has uploaded the Scott’s Astronomical concert, so, anyone who cannot attend live on Scott’s concert has a chance to watch how spectacular the concert is.