Based on the research, when Fortnite Season 2 Chapter 2 launched a month ago, dataminers leaked a number of files from the update. The players are mainly interest in skin leaks which come from updates with dataminers posting the images on Twitter. But, there are several skins which get added to the files that are still being worked on. We have already seen this numerous times in the past. Then, in the v12.00 Fortnite update, dataminers leaked code which suggests there could be a Travis Scott Fortnite skin.

The developer Epic Games have already done collaborations with music artists including Major Lazer and Marshmello. Both of these collaborations included a full set of cosmetics, even though Marshmello hosting a live concert in-game as part of the collaboration. The leaked code in the v12.00 Fortnite update has the string name “Travis Scott”. Yeah, in fact a new Fortnite Travis Scott skin has leaked. It would make yet another celebrity addition for Fortnite: Battle Royale title from Epic Games. 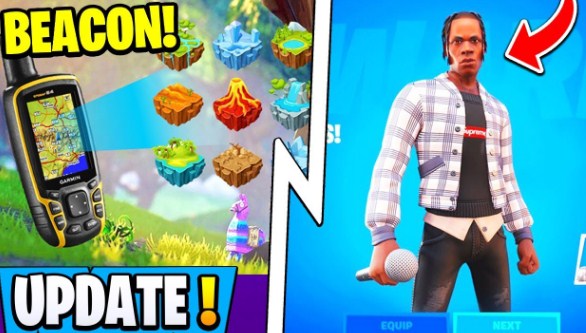 When Fortnite Season 2 Chapter 2 continues to chug along, the news of new crossovers has been quiet surprisingly. From Marvel to Star Wars, and then a Mello concert, the developer Epic Games has proven that nothing is truly off-limits which is why the Fortnite Travis Scott leak does not come off as too big of a surprise. We get information that earlier this year, renowned Fortnite leak sites have speculated that a new concert will be on the horizon for Fortnite: Battle Royale game. At the moment, it looks like we know who the artist in question will be: Travis Scott. Discovered by dataminers, it looks like the Travis Scott concert that can be on the way will go the route of the previous Marshmello showcase that includes the new skins for both the player and their gear as well as the new graffiti and emotes.

Unfortunately, in this time, for those who are excited, there has been no release date information announced, nor a date found in the files. However, HypeX did share the first look at what the new skin allegedly looks like. In this case, you are able to open your Twitter and visit @HypeX.

Apparently, a Fortnite Travis Scott event would not be far-fetched. American rapper has not been shy about his love for the games and for Fortnite: Battle Royale, so the match would be perfect with Epic Games always looking to surprise their players. An update just went through this morning for Fortnite with no new files discovered. However, the dataminers are definitely all over this time. Therefore, if you interested, you have to stay tuned, we are going to keep you posted.

As we know that now Fortnite is available on Xbox One, PlayStation 4, Nintendo Switch, PC, and mobile devices. You are able to keep an eye on our website to get more information related Fortnite including Fortnite Travis Scott skin inclusion and event.