In the past, we all have seen Epic Games provide players with the opportunity to get their hands on cosmetics for free. Whether it is by completing challenges as part of a collaboration like with Marshmello, or completing a community challenge and gaining the Falling Leap Wrap, the developer has always provided players with free rewards. 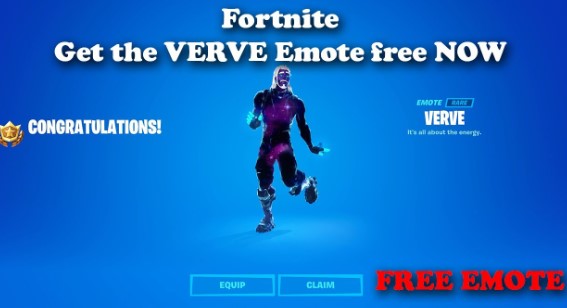 Apparently, the Fortnite Verve dance emote will be part of the We The People X More Than A Vote event. This one is an in-game event that will be showing in the Party Royale of Fortnite. We The People X More Than A Vote event is presented by OPUS UNITED. This one is a series of conversations that bring together a coalition of athletes and entertainments to inspire and empower young adults to take action against the voter suppression crisis that is disproportionately impacting Black communities. According to Epic Games, the second version of the show is hosted by Cari Champion and features rapper and activist Bun B, actress and comedian Yvonne Orji, rapper Russ, athlete Jason Heyward, and athlete and sports host Jalen Rose. You are able to read all about the in-game showing on the official blog post of Epic games.

For your information, the Fortnite Verve dance emote came about from the winner of the emote royale contest that Epic Games held some time ago. The winner, Michael Mejeh and his brother Jamie created the dance together and it is all about the energy.

If you want to watch the We The People in Fortnite, please follow these steps. First, launch Fortnite on Tuesday, July 28 before 7:00 PM EDT. Second, select the Battle Royale game mode, enter the Party Royale playlist, and go to the Big Screen of the Island. Third, wait for the show to start at 7:00 PM EDT. Fourth, continue the conversation with your friends. Do not forget to be respectful to the other players during the We The People.