Coral Cove is one of the three locations in a one of the challenges of Fortnite Season 2 Chapter 2 challenges. Were exactly is Coral Cove on Fortnite? The Coral Cove in the game is located on an island north of Sweaty Sands and just south of The Shark in A2. Remember to keep an eye out for the building that is similar to a shell and you will know that you have passed over the Coral Cove.

Aside from Coral Cove, there are two other locations of the challenge. Those are Stack Shack and Crash Site. The location of Stack Shack is north west of Holly Hedges in A4 on the most southern and largest of the tall islands protruding from the sea. The only where this one is located is only one that has a building, so it is quite easy to spot. As for the Crash Site, this one is located one the large island directly north of Sweaty Sand and directly west of Pleasant Park. You will know that you are flying over the Crash Site because below you will be crashed remains of a plane. 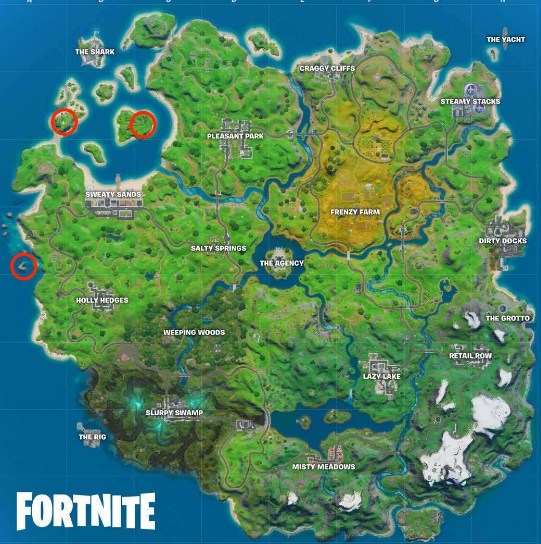 Since all the three locations are landmarks, all of them do not appear as named locations on the Fortnite map. Instead, they will be revealed when you enter the location. All that you need to do to complete the challenge is fly the Choppa you have acquired close enough to the landmark, before moving on or being shot down.

How to complete the challenge? The main reason that makes this challenge a bit tricky is that you not only have to visit the three locations within a single match, but you also need to do it without swimming. The good news is that the latest update of Fortnite added the new Choppa vehicle, which will let you fly around the map, making this challenge much easier.

You are able to find Choppas on various helipads around the island, a couple that are located near the three areas you have to visit for the challenge. You are able to reliably find a Choppa in Pleasant Park, so you are recommended to get the vehicle and then fly to the crash site, Coral Cove, and Stack Shack in that order. In addition, the Choppas are able to be found near certain Shadow Safe Houses and various locations related to the two warring spy agencies in the game.

Visiting Coral Cove, Stack Shack and Crash Site location has a condition so it is different compared to the previous challenges that see you visiting various locations on the Fortnite map, like Lockie’s Lighthouse. You need to visit all the three locations in one match without swimming. Completing this one will earn you 40,000 XP, that will help you to unlock the new Fortnite Chapter 2 Season 2 Battle Pass skins. For more information about were exactly is Coral Cove on Fortnite, do not forget to visit the official website of Epic Games as well as the other sources.