Skip to content
Homepage / Guides / What Day is the Fortnite Galactus Event?

When you zoom in the maps on the sky, you will find the image of Galactus who is coming down to Fortnite island getting closer. It means that Galactus is ready to eat all the Fortnite island’s energy. However, the Earth planet is one of Galactus’ targets to get a lot of resources from them.

The Galactus event takes place on…

There are a lot of Fortnite data-miners who have leaked that the Fortnite Galactus event will take place on December 1st, 2020 at 4 PM ET. It means that there’s a bit more than just a week to prepare anything before Galactus lands on Fortnite island. This event will be available on all platforms including PS4, PS5, Xbox One, PC, Nintendo Switch, Xbox Series X/S and mobile. 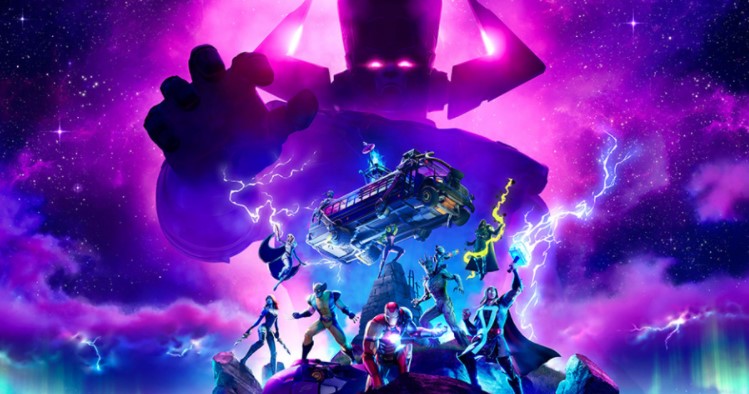 As a tweet from the official Fortnite account @FortniteGame posted on November 23, 2020 at 12:00 AM, it announced that the players should be ready to save the island if they work together. However, it is your last chance. For Fortnite fans in the United Kingdom, the event will start at 9 PM on the same day with the finale of Nexus War which is expected to run for over five minutes.

What’s going to happen in the Galactus event?

Many Fortnite fans expect that this event can be one of the biggest live events yet seen in Fortnite. However, it will be the climax of Fortnite Chapter 2 Season 4 before it ends and then the players should wait for Season 5.

In this event, you do not wonder where the battle royale definitely will bring for the changes to the island as the Devourer of the Worlds that gives it his best to destroy everything in his path. More good news for the players,  they have a chance to test their steel and superhero powers to defeat the Galactus who is so fast to land in the Fortnite island.

What must be prepared by players ?

Epic Games long before has given the warnings and suggestions regarding to the Fortnite servers and taken the ways to avoid any disappointment. They also notice that the fate of all reality lies in the balance given Galactus is approaching the island with a count of just a few feet.

At least there are multiple specific requirements that you should notice before you join this Galactus event. Here they are:

First, everyone who wants to join the Galactus event should download the 14.60 update, go to the Fortnite app and load the game on your device to download right now.

Second, as Epic Games has acquired a video-chat app, Houseparty, of course the players really have to download the Houseparty app on their device in order to live chat in Fortnite while attending this event.

Third, Epic Games suggest everyone who wants to join save Fortnite island against Galactus in which anyone has to be in Fortnite at least 60 minutes before this event starts. The playlist is also expected to go live 30 minutes before the event begins. As you may expect, the Fortnite servers absolutely will be busy and there is a chance you can miss out on this big event.

Fourth, because the event will not have any replays when it is over which means it’ll be a one-time event, Epic Games recommend you to capture this live-event and share your experience to your friends through streaming on your social platform. They also ask content creators or Fortnite streamers to follow their guideless to create the best possible experience.

Those may be some requirements that you should recognize before you finally join the Galactus event.

What’s Galactus’s goal to land in the Fortnite island?

Of course, Galactus has a certain goal that leads him to come to Fortnite island. Known as The Eater of Planet, Galatus definitely will eat the planet to maintain its survival. He can change a planet into the form of the energy which he finally will absorb.

Galactus wanders between planets in the universe and will choose which planets he’ll consume a lot. It’s scary, his hunger to eat this planet makes him one of the villains who threaten him. Even the earth was once a target for the planet he would consume.

So as in Fortnite, Galacts will come to Fortnite island to exploit a powerful source of energy. Certainly, to prevent what Galactus does in Fortnite, that’s Marvel superheroes’ task to against Galactus.

Iron Man can be the first shield to forestall Galactus with a black hole device.  In this process, the Galactus may end up to create chaos which transforms to the island yet again. Remembering that it may be Fortnite’s biggest event ever which is so hard to deduce the exact details.

Well, you really know that the countdown for Galactus’ arrival has already begun. For the result, there will be certain changes in The Ruins POI on the Fortnite map. Moreover, the helicarrier as the recently spawn island in the game is going to float above The Ruins POI.

The players hope to be able to get access to the secret vault in the helicarrier. Then, they are able to use their weapon to defeat the Galactus in the battle.

Many Fortnite players ask questions whether they will have just a live event or they have a big limited time mode to the Thanos mode from the Avengers: End Game where they can do their superhero powers and confront the armies of the Galactus.