In the game called Fortnite, OG means for Original Gangster. Recon Expert OG means the skin called Recon expert that was released a long time ago, having one meant that you have played for a long time and is thus considered a pro gamer.

Everyone knows that Recon Expert has been the rarest skin in the history of Fortnite. It has been almost two and a half years since the skin first appeared in the Item shop, but the amazing skin has made its return. Epic Games, the developer of Fortnite, has put the cosmetic back on sale. As stated before, all free to play games have their extremely rare skins like Recon Expert, which only some OG players have. 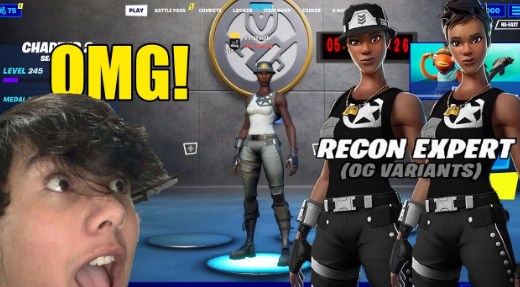 Epic Games decided to give players a chance to get Recon Expert back on May 27, 2020. As you probably have expected, this decision has become a debate in the community. The collectors or the new players are surely happy with the news as they are able to add this anthology skin to their inventory. On the other hands, some OG players, if not all, think that certain skin should remain rare forever and only reward the very first players. Once again, the return of the Recon Expert has become the hot topic in the debate over the rarest skins.

What does the OG Recon Expert look like now? Now, there are two styles of Recon Expert. In general, this one is described a military woman or soldier with dark skin. The girl is wearing a whitish pale sleeveless sports shirt with a start emblem in khaki colors and pale greenish trousers with lines as a decoration. She is protected with iron insets to her legs right on the lace up shoes over-protected with an iron inset on her left leg. The skin has khaki fingerless gloves with a programmable screen on her right hand. She has a placed backpack and there is also a hat protecting her from the sun. Aside from those, there is an identification disc on her neck that can make her to be easily recognizable in case if something bad happened. The only difference is the hat. The new release of the skin does feature a hat.

Even so, some people think that there is no special thing between the OG owners and the ones who just bought Recon Expert now. It is really different compared to the other re-relased rare skins such as Skull Trooper and Ghoul Trooper.

Skull Trooper has multiple color variants, including one just for OG owners, it had a female version named Skull Ranger, and even its original Scythe came back as well. There are two new style options of Skull Trooper. The green glow one is available to everyone while a purple glow one is exclusive to those who owned it previously. It means, those OG players who are mad about this skin returning you will have that as a unique feature to show off your old ways.