Skip to content
Homepage / Guides / What is a Bot in Fortnite

You may have heard about a bot lately in Fortnite but you do not really know what it is. As a Fortnite player, you need to know about it so here we are going to reveal to you what bot is and how it works in Fortnite game.

In the game of Fortnite Chapter 2, you were able to play against bots. What is bot? Bot here means non human players. In patch v10.40, Epic Games introduced bots to Fortnite Battle Royale and the reasons of why the added bots because bots can give a chance for new players to learn and improve. The bots will be able to work together with the new matchmaking system. The new matchmaking system is skill based matchmaking. However, you will not play against bots forever since as you improve the fewer bots you will face and bots are not available in competitive playlists. 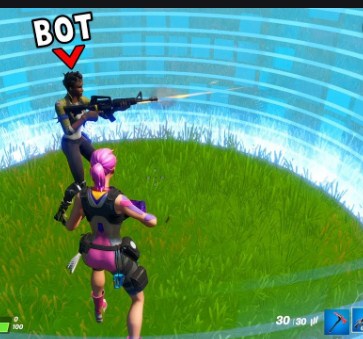 How to find a bot? It is a little bit tricky since bots can also use any skin and have a name that seems normal. However, sometimes you can know it is a bot or not based on how it is moving and how it makes decision. There are some ways that you can tell for sure if a player is a bot or not. Here they are:

You may also often hear Fortnite players such as a streamer call others a bot. So, what does bot mean here? If you watch Fortnite streamers or anyone call other players bots, it means that it is an insult which means a player that is not very good at Fortnite. You know that bots in video games are usually not a good thing since they are added to help new players in the game. So, calling a player as a bot is the same as calling him bad at Fortnite. What is bad? It can be their movements, they bad since they do not build and many other aspects.

Streamers may use this term to insult other players but their aim sometimes is just for making the video fun. Confidence can be another reason of why they call a lot of players bots. By thinking that every player is a bot in their game, they are able to play more aggressively and it makes their content more interesting so that it can increase the view.