Skip to content
Homepage / Guides / What is Houseparty in Fortnite?

Voice conversation services, aka voice chat, are a common feature in online games that aim to facilitate communication between players.One of the online games made by Epic Games (Epic), Fortnite, will present a more sophisticated method of communication, namely conversations via video calls (video chat), such as in teleconferencing applications. What is it?

To serve the online chat in the game, Epic Games acquired the Houseparty voice chat app to be available in Fortnite later. The Houseparty here is a group video-chatting app which lets you connect face-to-face with the people. This app also allows the multiple users to video-chat with each other. Moreover, the Houseparty app is an social platforms which brings people together and create positive social interactions in the real-time. 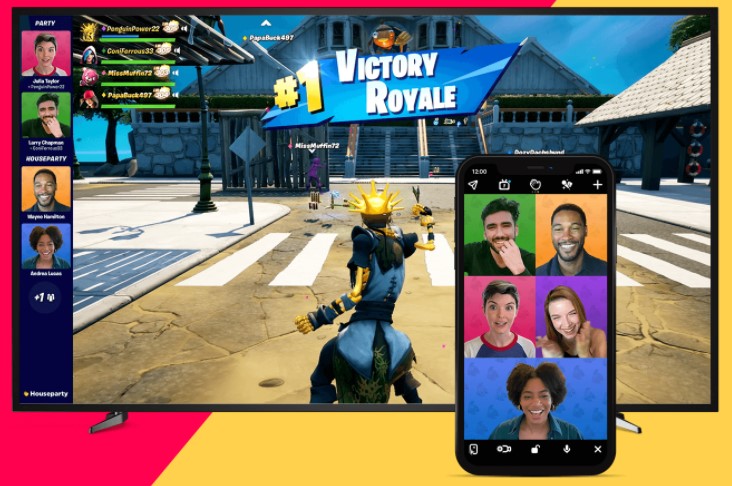 Surprisingly! Today, such the good news for Houseparty users as you can join the Fortnite’s family through the connection of Houseparty to Epic Games. Well, the Houseparty app later will allow you to play Fortnite with your friends while video-chatting.

Now, the deal is finally bearing some jackpot  after several months of the global quarantining. Well, Epic Games recently announced that the title is getting the video-chat through the Houseparty integration. Then starting today, this feature will be available on a handful of the platforms including PC, PS4 and PS5.

How to Connect the Houseparty to Fortnite?

Once you have downloaded the Houseparty app on your device, the users need to connect the Houseparty account with the Epic account which is used to play Fortnite.  The way is to click on an icon located in the top menu row. This icon resembles a “TV” with a touch of the letter “F” in the middle.

Once connected, players can add other players who have also connected their Houseparty and Epic accounts, so they can join the Houseparty virtual room and start video conversations. Later, the video chat which is displayed on the Houseparty app will also be seen in the Fortnite game, to be precise in the row of video chat windows to the left of the game display.

Then, the images showing either on the Houseparty and Fortnite app are cropped tight on the player’s face and the virtual background is added, a la Zoom. As the Fortnite game for all-ages, of course there are some additional safety features displayed on the board including the capability for the parents to toggle off the feature in Fortnite’s settings.

That’s it! After you’ve connected the Houseparty to Fortnite, you definitely can start to video-chat while playing Fortnite.

How to Start Video Chat in Fortnite?

Later, if you have integrated the Houseparty app to Fortnite, you will have a chance starting video-chat with your friends. Of course, not all people really know how start video-chat. Don’t worry! In this post, we’re going to share you how to start video-chat in Fortnite by following these steps:

Moreover, if you are annoyed with someone and don’t want to see them on video chat, you can block them. Tap their face view, then hit the block button in the menu that appears.

Epic Games also gives parents control over this feature through game settings. Well, since the Houseparty app is available for people 13 and over, the video chat feature also applies the same rules.

When this Feature Can Be Used?

Even though it has been announced, this feature still seems unable to be used because a lot of users did not find a “TV” icon equipped with the “F” logo earlier in the Houseparty application.

In addition, there is also a banner informing you that “Fortnite Mode” is not yet available and will be coming soon. The similar information was also conveyed by the official @houseparty account on Twitter. This account has not revealed when this feature will be used, but promises to provide the latest news regarding the planned presence of the video chat feature on Fortnite.

Furthermore, Epic itself has confirmed that this feature can only be used for the time being on the PC, PlayStation 4 (PS4), and PlayStation 5 (PS5) versions of Fortnite, unfortunately there is no news yet for the Xbox Series X | S. Availability on other platforms, if possible, will be announced at a later date.

What Will the Players Get by Integrating this App?

Well, for players with devices without video chat support, Epic Games provides another way to get this Rainbow Fog Wrap. Namely by winning 5 games during 20 November and 26 November 2020. You can receive bonuses on 4 December 2020.

How about other games developed by Epic Games? Epic did not say whether the feature will be present in other games, or when it will be available in Fortnite on other platforms.