Over 12 million viewers gathered to watch Travis Scott Astronomical Convert live in Fornite. This one is arguably one of the most ambitious events ever created by Fortnite. that night, Travis Scott gave a concert that was broadcast live on Apollo Island, gathering 12.3 million people.

What songs were played during the Fortnite concert of Travis Scott? La Flame then changed to Stargazing (sans Swae Lee), while also transforming the map into a cosmic experience. the weather changed, the skies turned dark as meteors of fire rained from the sky. The backup dancers Travis Scott were these, making everything perfect from the visual, chaos, and scale of the concert. 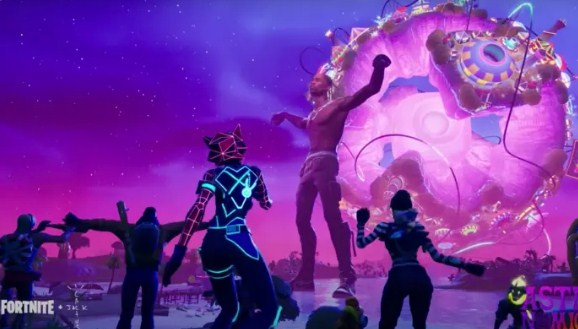 Goosebumps came next as Travis Scott seemingly wiped away the atmosphere and the screen went 100% psychedelic. Each shade of the rainbow color came and went from every direction and Travis Scott continued to flow and bend reality at will.

The recent single from Travis Scott’s Jackboys collaboration with friends and his fellow artisch such as Migos, the late Pop Smoke, and Don Toliver named highest in the Room took the spectators under the sea as they literally did the exact opposite of the namesake of the song. Travis Scott traveled leagues under the ocean alongside the spectators as he donned an underwater suit that needs to be a purchasable skin in Fortnite. alongside giant jellyfish, the transition of it brought a clean, chilled out felling at this point in the event.

The event was ended with a brand new single and collaboration with Kid Cudi, called The Scott, but not before Drake guide the spectators off planet with his verse from Sicko Mode. Once everyone left the atmosphere, Travis Scott delved into The Scot while sitting on the top of a giant planet complete with moons in orbit (not the Astroworld), and by the end of the event, the viewers were being transported through wormhole back to the Fortnite map.

An epic, cosmic ride complete with stage level effects, Travis Scott broke the internet this weekend, setting a record of more than 12.3 million players simultaneously online seeing the concert, and many of the spectators cannot wait to see what craziness Fortnite has cooked up for next.

What songs were played during the Travis Scott concert in Fornite is a question that needs to be asked by no one if you are either a fan of the singer or a player of Fortnite. For those who attended the concert of Travis Scott and want to relive it, Fortnite has created a playlist available on Apple Music. The playlist features the sounds that were played during the concert. If you have a subscription to the streaming app, you can go to the link provided by some sites such as Millenium. For the others, there is a solution for you. You can go the playlist music list and then use your usual music application in order to listen to the songs which were played during the event.