Epic Games announced the #FreeFortnite tournament that will start on August 23rd, 2020. The Fortnite players who participate in this tournament will have a chance to win a skin called ‘Tart Tycoon’ or ‘Apple skin’. This skin is totally represented by a man with an apple-shaped head who has an evil expression. 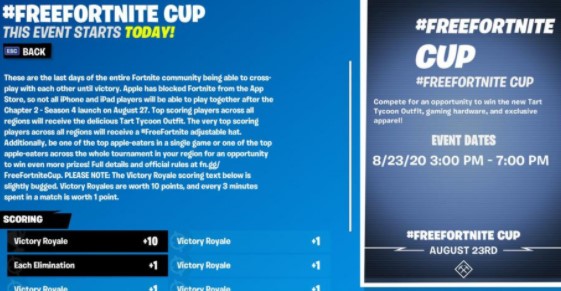 This character of the apple skin was first shown in the video ‘Nineteen Eighty-Fortnite’ released by Epic Games sometimes after challenging Apple’s policy to kick Fortnite from the App Store.

As we know that a dispute between Epic Games and Apple Inc. still continues today even worse. Each company mocked each other in genius ways. Well, the Tart Tycoon skin can be called as a result of this dispute to mock Apple Inc.

To participate in this tournament, gamers only need to check the Compete tab in the game to see when the tournament will start in their area. After the tournament starts, they have four hours to top the standings and win the prizes above.

What time does the Free Fortnite Cup start?

Before the tournament started, Epic Games also reminded the participants who are using iOS devices that they will not be able to play the latest season of Fortnite which will start on August 27 and will likely get a significant update.

For the Fortnite players who are still using iOS to play the game, Epic Games definitely suggests them to move to other platforms where Fortnite is still available such as Android, PC, Mac, Xbox One, Nintendo Switch and PS4.

How to get the Free Fortnite Cup rewards?

As we have explained above, the players will have a chance to get a main reward, that’s Tart Tycoon skin or Apple skin. Of course, there will be certain points which the players should reach.