Skip to content
Homepage / Guides / What to Expect from Fortnite v11.40

The nest Fortnite v11.40 will be dropped soon. All the signs are pointing to the new update of Fortnite, which will likely bring v11.40, possibly one of the last updates of Chapter 2 Season 1. What to expect from Fortnite v11.40?

The first thing that we can expect is the bug fixes. It is hard to tell what Epic Games will be bringing us with each update, but bug fixes are a certain thing. There have been some Fortnite Chapter 2 updates that have only addressed some little bugs. Without the path notes, the only sure thing is about what Epic Games puts on the Fortnite Trello board. 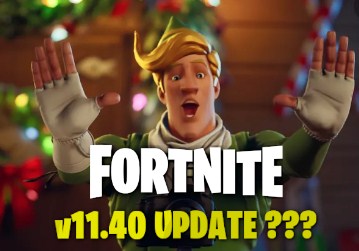 It does not matter what is missing from the update, at least Epic Games will be addressing the bugs in v11.40 such as sniper Rifle crosshairs may disappear when players fall into a Hideout, editing quickly is able to cause players to remain in Edit mode, F key not enabling proper movement after direction remap, Star Wars Legacy entries disappeared, Overtime Challenge known as Visit Different Bus Stop not tracking for all bus stops. There are a lot of bug fixes that are “In Development”, but these are all listed as Fixed in Live on the Fortnite Community Issues Trello Board.

The second one is Overtime Challenges. The first batch of Overtime challenges for the Remedy vs Toxin skin was already released. The developer of Fortnite named Epic Games confirmed that this one would be the first week of challenges, but it was the only one listed in the game files.

The Overtime challenges probably will not go live until Thursday, but data miners will almost certainly find the next Overtime challenges in the game files. Let’s see the challenges for the next two weeks as well as the skin associated with them. Some people think it is going to be Rippley vs Sludge skin along with a variant for Cameo vs Chic. For your information, the 8-Ball vs Scratch skin already has a third style, and tier 100 skins have never received an Overtime variant.

The third one is Valentine’s event. It feels like a bit early but Epic Games may include some files for a potential Valentine’s event. They showcased the Share The Love Event last year. This one was similar to Winterfest 2019, where players could unlock other cosmetic items and different skins.

The fourth one is Heavy AR. There is a rumor that Heavy AR is returning to Fortnite back in November, but have yet to see it in the game. the Epic Games updated the weapon, substantially buffing the damage with the 88/92 headshot multiplayer. A lot of players considered the new Heavy AR to be a bit too powerful, so Epic Games may have changed their mind about re-releasing it. Actually, the possibility of Epic Games to bring Heavy AR is low, but everyone can dream. Other than that, all that we can do is to wait and see what the update Fortnite v11.40 brings to the players.