Storm the Agency challenges of Fortnite have gone live alongside the 12.61 update of the game, giving you a few more tasks to complete before Season 3 officially starts. To open a faction locked chest at three different spy based is one of the trickier challenges from the bunch asks you to open. For those who are having trouble tracking those down, here is a guide explaining where the sky bases are and how to complete the challenge.

So, where are all the spy bases in Fortnite? just like the safe houses you have to visit for a separate Storm the Agency challenge, spy bases have been a fixture of the map since the beginning of Season 2. All of them are a bit more overt than the safe houses, however, while those are disguised to look like common buildings, the spy bases are all named locations, so they are much easier to track down. Here are some of the chests at these bases locations. 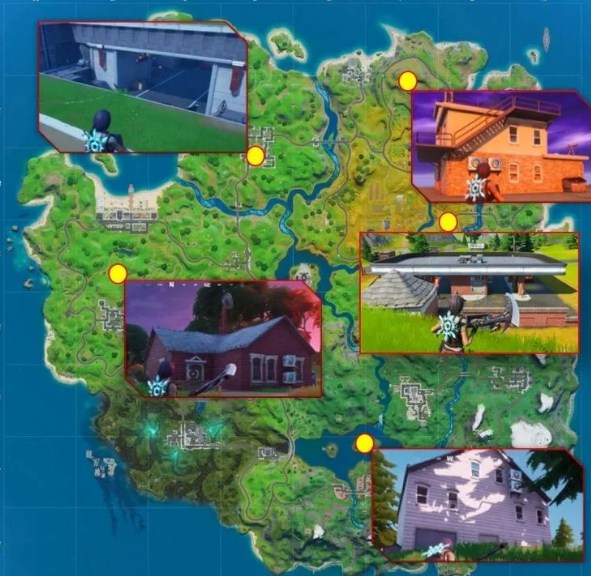 How to complete the challenge? Every spy base has a handful of faction locked chests, but to complete this challenge, you will have to open one at three different bases, meaning you cannot just hand around one location. Aside from that, you are also not able to open the chests like normal. You will first have to hop into a phone booth and disguise yourself, which will then allow you to unlock them.

The good news is that, every spy bases is located very close to a phone booth, so once you know where the chests are located, you should not have much trouble completing the challenge. Please open a chest at three different spy bases at you will earn a special Steel Shadow pickaxe.

Finding all the locations of the spy and grabbing loot from each matches up with the spy theme of the season this far, including the spy profiles and the henchmen players can scan. This one is an interesting theme for the upcoming weeks, along with the Deadpool skins and themes for Battle Pass users.

Despite of the theming and updates that Fortnite has seen over the last few months, it seems like the interest in the game called Fortnite is starting to waver as more and more Battle Royale games are flooding the game industry. May if the developer of Fortnite called Epic Games made more changes to the game, such as adding a CoD style Gulag, it might bring more players back to playing the game. Just like in most aspects, making something new is really important when it comes to the game. The more competitors means the more new things that should be offered. People love new thing as the same thing can make them bored, hence they look for the new one.