V-Bucks cards refer to the cards that are able to be used to purchase things such as outfits, pickaxes, wraps, emotes and Battle Passes. This page consists of the information about everything that you need to know about the Fortnite V-Bucks gift cards including where to purchase and redeem them.

In the official website of Epic Games, it was announced that Fortnite V-Bucks gift cards would be coming to retailers in the near future. The post stated that the V-bucks would be available in select US retailers over the next few weeks. It is still unknown exactly which US retailers will be selling the gift cards, but people already know that they will be available at Walmart, Target, and GameStop. Players have been posting the images of the in store. Actually, on the new section of the Fortnite website dedicated for the V-Bucks gift cards, there is no mention of them being available anywhere other than the US, but there is a possibility of you to see them in the other countries in the near future. 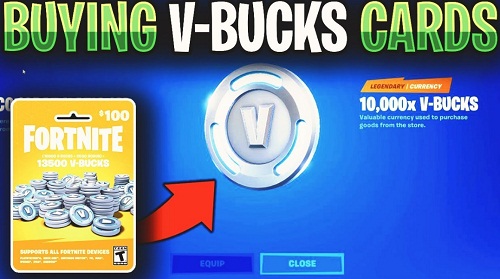 Once you purchased V-Bucks cards or been lucky to get one, the code will be on the back of the card. If you want to redeem the code on the back, you will have to go to the redeem V-Bucks card section of the official website of Epic Games. Then, you will have to click get sarted button. The next thing that you have to do is to select the yes or no on the question whether you already play Fortnite, which will prompt you to choose what platform you play on and then require you to sign in. Once you have done that, you have to enter your code to redeem the V-Bucks gift card.

Aside from that, the V-Bucks gift card post also mentions the famous Fortnite Merry Mint Pickaxe. This one is available when purchasing officially licensed Fortnite products for free whilst stock lasts. The thing is available in the United States, United Kingdom, Germany and France.

Furthermore, V-Bucks gift card is available exclusively at GameStop for the United States and Germany (online only), whilst it is exclusive at GAME in the United Kingdom, although it seems like their online stock has been depleted, but there are a few codes available in store.

Bedise getting Vbucks gift card for yourself, you are also allowed to give someone a V-Bucks gift card as a gift. Since there is no such thing called Fortnite gift card, you need to buy a card for the specific platform.